The last full day here at Aiken State Natural Area. Not long after dark last night I heard someone very quietly setting up on a nearby campsite. 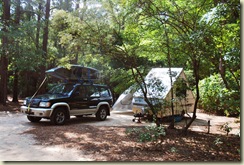 What a surprise this morning to see another Aliner parked three sites away. Not only an Aliner, but also two kayaks! Chris and Tina from Columbia are frequent visitors to South Carolina’s state parks. Very experienced campers. I’ll bet they’d be great interview subjects. 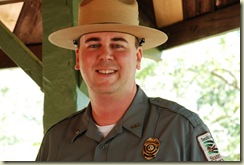 After breakfast and some writing in the Mobile Studio, I was off to the Park Office for an interview with Park Manager, Troy Crider.

Special thanks to Mr. Crider for taking the time to do this interview. He was especially busy today, since his campground was fully booked for the Memorial Day weekend. With spill-over to the primitive camping areas. And at present, Aiken State Natural Area has only two Rangers to handle everything: Park Manager Crider and Ranger Jason Robinette. Somehow they manage to get everything done. 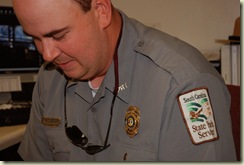 As usual, we began with a personal introduction and Mr. Crider’s background. He was born and raised in Columbia, in a South Carolina Park Service family.

And had plenty of opportunities to visit State Parks as a child. No wonder he became a Park Ranger!

Moving on to Mr. Crider’s preparation for a Park Service career and academic background, I learned that he began as a history major at USC, Columbia.

I then asked Mr. Crider about his career in the South Carolina Park Service. Beginning with his part-time work at Myrtle Beach while studying at Coastal Carolina. The photo above is of Mr. Crider’s name tag. It notes he’s been a Park Service employee since 1996. Sorry about the quality of the photo.

As it turned out, Mr. Crider spent six years at Myrtle Beach.

One of the busiest Parks in the system. Mr. Crider credits long-serving Myrtle Beach Park Manager Robert Turner with mentoring him during his stay there. Mr. Crider also served several years at Edisto Beach State Park, one of my favorite Parks in the System. 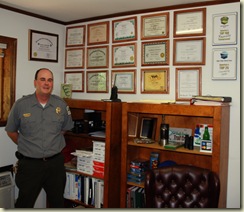 With time running short, we shifted focus to the Aiken State Natural Area. Mr. Crider has been Park Manager here for just two years. He described Aiken as a natural resource park. Where he and the Park Service try to maintain a balance between development of the facility for use by the public and natural resource management.

As you look around Aiken State Natural Area you’ll see the benefits of that balancing act. Resources are maintained as close to their natural state as possible, while still providing opportunities for the public to enjoy those resources. The hiking/walking trails within the Park are a good example of that. Also the lakes I’ve tried to describe in these posts. The combination ranges in effect from pleasant to breath-taking.

One important advantage of a natural resource park is the abundance and diversity of wildlife visitors will find.

I asked Mr. Crider about Aiken’s full-time creature residents. He mentioned so many that you’ll just have to click on the button to listen. He did include alligators and snakes in his description. And, like his Poinsett colleague, Park Manager McCants, noted that he’s never had an incident of snake bite in his Park. Something good to remember. 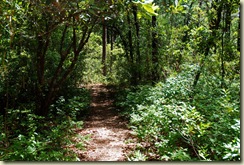 By now Park visitors were beginning to drop by the office. But I asked Mr. Crider about the Park’s hiking/walking trails and about the campground.

He quickly provided good summaries of both, and we completed the interview.

Thanks again, Mr. Crider, for your generous contribution of time and expertise to the CarolinaConsidered Project. And for agreeing to the interview during an especially busy day.

Well, that’s it. I leave Aiken State Natural Area tomorrow morning. It’s been a wonderful experience. I’ve enjoyed the stay and learned more than I expected to learn about this State’s amazing natural environment.

Click here to listen to the interview with Mr. Crider from beginning to end, without interruption.

Week after next I’m hoping to visit King’s Mountain State Park. Another CCC-built Park. But in the northernmost part of the State. A very different sort of Park in a very different natural environment. So stay tuned!