Man lives not by natural and social scenery alone. He also must eat. Week before last, Lee State Park Manager, Bryn Harmer, recommended Batten’s in nearby Wedgefield. So, off I went this morning around 11:15. Just out the Park road to north on Route 261. Past the Manchester State Forest Office on the left. 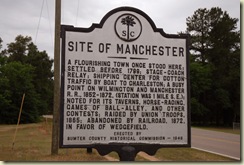 And, speaking of Manchester, here’s a marker identifying the location of the original Manchester. Well, the original one in South Carolina, anyway. Established during the 18th century, Manchester thrived as a shipping center and stage coach relay. It was burned by Federal troops in 1865 and never rebuilt.

“Noted for its taverns, horse-racing, games of ball-alley, and other contests.” Hmmm. Sounds like a pretty wild place! “Ball-alley”? And I wonder what those “other contests” were …. 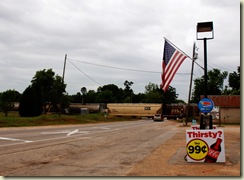 Wedgefield, the sign notes, succeeded Manchester as the crossroads. And here’s a freight train today fulfilling that destiny on Wedgefield’s main street. 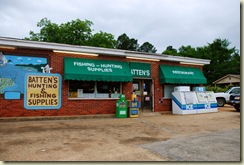 Right in front of Batten’s Hunting and Fishing Supplies. Oh, and Restaurant. Which is where I’m headed.

Mr. Mike Earnhardt bought this store from the original owner about 25 years ago. And “just hasn’t gotten around to changing the name yet.” Probably a good thing since it’s known far and wide as “Batten’s.” A new name would only confuse things. Even if Mr. Earnhardt did change it. 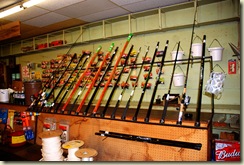 Now, Batten’s is everything it claims to be on those signs out front. Once inside, the front of the store is devoted to a wide selection of hunting and fishing gear. 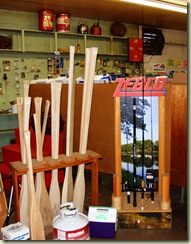 Anything the hunter or angler might possibly need. And then some!

Well, that and fresh vegetables. And garden supplies. Including seeds from the Weeks Seed Company, developer of four world records! 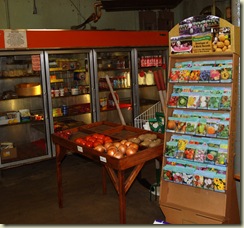 And a wide range of groceries and kitchen supplies. I was surprised by the variety. Everything, including the milk, was fresh. 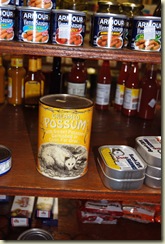 Of course, the grocery selection included other essentials for the sportsman’s kitchen. Such as Vienna sausages, sardines, canned tuna fish, spaghetti, instant ramen, and creamed possum.

What??!! Creamed possum? Well, that’s what the label on the can says. “With sweet potatoes garnished in coon fat gravy.” Oh my.

Now, only a city boy would try to buy this can of creamed possum. Which, according to Proprietor Earnhardt, isn’t for sale anyway. Everyone knows creamed possum is eaten fresh. Well, ideally. Certainly never canned! A conversation starter, to be sure.

Nor would any experienced woodsman take this enormous snakeskin seriously. Recognizing right away that two skins have been spliced together. [I didn’t. But Mr. Earnhardt pointed out the splice ….]

However, a similar sign on the other side of the store provides a valuable reminder for those of us tramping through woods that may harbor rattlesnakes. They often come in pairs. So, as the sign cautions, should one appear, watch for another close by.

Batten’s Sportsman’s Kitchen, as I mentioned, is at the rear of the establishment. Walk straight back past the knife case, fishing and hunting supplies, and groceries. The door will be open. 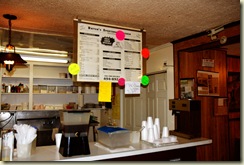 Here Ms. Rose Cato and her assistants offer fine sportsmen’s fare. I passed up the sausage and corn dogs, hot wings, egg rolls, and even fried gator, for today’s special.

Which was beef stew. Over beautifully cooked long-grain rice, green beans, and rolls toasted just like you wish they always were. Only two pieces of pecan pie remained on the plate, indicating a good reception by more experienced customers. So I added a piece of that as well.

Now, this is good food! And, at $4.95 for the special. I mean! I’d be pleased to eat here regularly. And work slowly through that interesting menu. 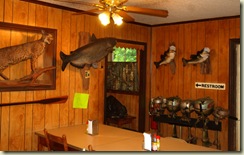 But for me, at least, the most memorable part of the Batten’s Sportsman’s Kitchen dining experience is the overall ambiance. Especially the displays decorating every wall. Designed, as you see above, to excite and inspire dedicated hunters and fishermen. 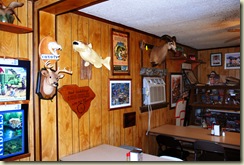 Here’s another wall. The faux deer on the left talks, by the way. Has interesting things to say! 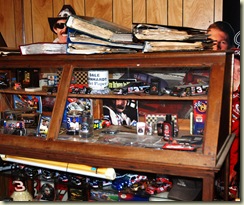 Here’s a close-up of the case dedicated to memorabilia from a celebrated NASCAR driver you see In the background of that previous photo. “Dale Earnhardt toilet paper”? Oh my.

Of course, no crossroads sportsman’s restaurant would be complete without a “braggin’ board.” And here’s Batten’s. Photos of prize fish, deer, and turkey.

But the thing that caught my eye was the display of classic outboard motors on the back wall. 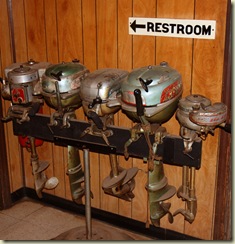 Just below the sign for the restrooms. You can’t miss ‘em. And you’re unlikely to see the like anywhere else. Take time to look them over carefully. See if you can remember any of them. What a treat!

Well, the whole visit to Batten’s Hunting and Fishing Supplies, and Sportsman’s Kitchen, was a treat. All too soon it was after 1:00 p.m. And I had to leave for a 1:30 p.m. interview appointment back at Poinsett.

Next time you drive to the beach get off those homogenized superhighways and detour down Route 261. It’s convenient from I-20 in one direction, and from I-95 in another. It’s a good road, clearly marked. Even I couldn’t lose my way. And a beautiful drive throughout.

Best of all, when you get to Wedgefield stop at Batten’s. You won’t be disappointed. The food is excellent and reasonably priced. You can pick up most anything you might have forgotten in the way of camping, fishing, hunting, or even gardening equipment. As well as all of the necessaries in the way of groceries.

Say hello to Proprietor Mike Earnhardt. He’s usually there and a great conversationalist. Best of all, take time to look through the wall displays. Some of them are even for sale! [Not the can of creamed possum, though ….]