Haven’t been back to Edisto Beach State Park for quite a while. One of my favorite Parks. And this site # 16 is the best of all. No wonder it has to be reserved months in advance! 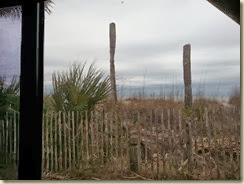 We’re expecting freezing rain here beginning this afternoon. Maybe even snow overnight or tomorrow. Should be quite a sight. The view above is out the right-hand window of the Aliner late this morning. Don’t know if it will come through in the photo, but the water is gray and angry-looking. Beautiful in its own way.
That’s the advantage of a small RV like this Aliner over a cabin somewhere in the woods. With the Aliner I can change the view out the windows whenever I want. Mountains one week; ocean beach the next.
Great weather to work on the next novel, “Death Long Long Ago.” No excuse not to write! And it’s coming along. The first draft is about 70 percent done now. Slow but steady.
Posted by Robert Angel at 1:12 PM 1 comments 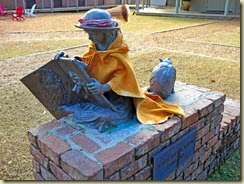 Ask most any graduate of Hammond School in Columbia, South Carolina, what they remember most about their Hammond experience and they’ll mention Mr. Mancke’s Early Tech Week. 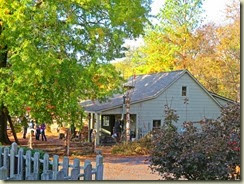 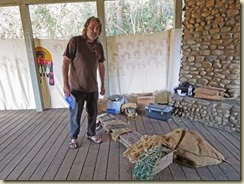 Just one example. Consider string. Or cordage. Or rope. There’s more to learn than you might imagine. Unless you’ve spent time in the woods without a piece of rope you badly needed. Benjamin “Raven” Pressley from North Carolina visited Tech Week last year to show Hammond fifth-graders how to make cordage from materials found in nature, and how it’s used. Learn more from Raven Pressley on-line at http://goo.gl/xtIJml
I could go on and on about what I saw during a visit to Hammond’s 2013 Early Tech Week. Instead, I decided to interview our granddaughter, now a Hammond sixth-grader, who agreed to describe her experience last year and show us some of the materials she created.
Here, Janie recalls her overall Early Tech Week experience, describes the six “stations,” or technologies presented, and explains the decorations on the statue in the Amanda Walker Taylor Courtyard.

If your browser fails to play the embedded video above, click here for the YouTube iteration.
Next, Janie describes the first two early technologies she learned about last year: cordage and paint making.

Again, if your browser fails to play the second video, click here
In this third and final segment of the interview, Janie presents three more early technologies: burn and scrape, though which cups and bowls were made from sections of tree trunk; creation of musical instruments from river cane; and how even the feet of harvested deer were used by early Americans rather than wasted.
Click here for the YouTube version of the above video.
So there you have it. One of Hammond School’s remarkable initiatives, as seen through the eyes of a sixth-grade participant. Thanks, Janie, for your help. And take good care of your Early Tech Week artifacts. Well … maybe that frozen deer foot has passed its best-by date …..
Posted by Robert Angel at 11:59 AM 1 comments

(Click the photo above to access the Tea Room’s fancy new website. Lots more information there.)
Yesterday my wife and I drove to Ridgeway, South Carolina, for one of Laura’s Tea Room’s famous high teas. It turned out to be the best yet. During the four years since Carol and Kelly re-opened The Thomas Company they’ve made lots of changes. One thing that hasn’t changed though is the quality of their teas and food. 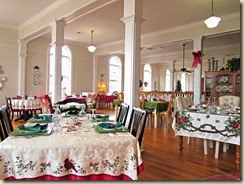 This is a quick snap of the second-floor tea room from our table next to the exposed original brick wall. I mean! 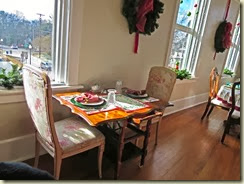 And here’s a table for two just like ours but next to the front wall with its huge windows overlooking Ridgeway’s Palmer Street. Everything you need to enjoy a real cup of tea. Right down to the napkin holders. This is a charming room.
Here’s a view of the mezzanine from the second floor. Ladies can choose one of those fancy hats on the way to the dining room if they’re so inclined. 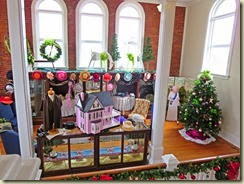 Best not to ask how many brands, or even types, of tea Carol & Co. serve here. The list goes on and on. Something for every palate. From good solid English breakfast tea, brewed and served properly, to unusual flavored varieties. Like iced and sweetened pomegranate green. “Pomegranate Green”??? Well, it was excellent. And I never drink flavored teas.
Click this link, tearoom@truvista.net, to sign up for Carol’s excellent newsletters. Carol’s posts will make your day. Every issue a different theme. AND, she lets us know about special events and even discounted specials through the newsletter. Wish I could write like that!
Oh, and speaking of food, here’s a short video of what we had to eat during our last visit. Just too much to describe in words. Enjoy.

(Click here if your browser fails to display the embedded video)
Posted by Robert Angel at 2:24 PM 0 comments

On the 18th of last month I had the opportunity to interview Mr. Russell Schwarz, Director of Special Projects at Innova Disc Golf in Rock Hill, South Carolina. I found Russell easy to talk with. He’s a man comfortable in his own skin, and he obviously loves what he’s doing. An enthusiastic missionary for the sport.

Russell’s used to interviews, unfazed by tape recorders and cameras pointed his way, having done dozens, if not hundreds, of them. Yet, as you’ll see below, he manages to offer fresh, interesting insights into the expanding world of disc golf. 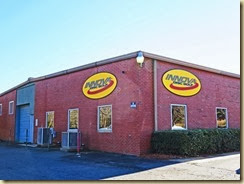 I met Russell at the Innova Disc offices on the outskirts of Rock Hill on a busy day. The company’s offices were impressive. Simple and functional. Innova obviously doesn’t waste money on the expensive yet frivolous decorations so often seen at companies of this size. Encouraging! Maybe that’s one reason Innova’s survived since 1983 as the leading supplier of disc golf equipment.

Once we sat down, Russell was more eager to talk about disc golf than about himself. But I was able snag a few biographical details as we went along. Including his involvement in disc golf and how he arrived at Innova. Here they are:

If your browser refuses to display the embedded video above, click here for the direct YouTube version.

I asked Russell to compare disc golf to ball golf and quickly learned “ball golf” is considered a pejorative term. It’s “traditional golf,” or just plain golf. He also explained that most anyone can play, and enjoy themselves. From kids to seniors. Without spending a fortune on equipment and club memberships.

Russell had quite a bit more to say about his “obsession,” as he described it. He said there were only twenty-some courses in the whole country when he began to play in the late 1970s. Now there are more than 5,000. So, it’s an enduring phenomenon, not just a fad. Steady fifteen percent annual growth since the late 1970s doesn’t add up to a fad.

The direct YouTube link for the video above, if you need it.

Finally, I asked Russell about the new disc golf course at Chester State Park. It’s one of several courses he designed in 2013, and he’s pleased with it. 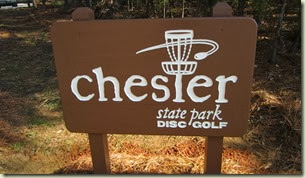 Click here for the direct YouTube link if your browser doesn’t display the above embedded video properly.

Kids and seniors will find the nine-hole course more comfortable. The eighteen-hole course is designed to offer medium-level players a challenge on the first nine tees, and champion-level players a test of their skills on what he called “the back nine.” I’m no golfer, disc, ball, or otherwise. But the eighteen hole course sure is a pleasant walk in the woods. Here’s a look.

So, there you have it. Disc golf as explained by one of the sport’s premier course designers. Thanks again, Russell Schwarz, for your time and expertise. Your contribution to Chester State Park will be appreciated for years to come.