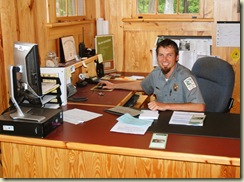 Hurrying back from Wedgefield to the Park Office, fortified by Batten’s lunch special, I was able to catch Park Manager McCants for an audio interview. 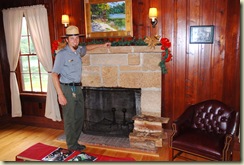 Mr. McCants was more eager to show me special features of the Park than he was to do the interview. First was the Park’s newly renovated tea room or reception area. With its coquina fireplace, beautifully stained wall panels, hung with original art. 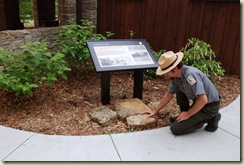 Then, as I eased the digital recorder out of its case, he suggested we step outside for another look at the explanation of the Park facilities construction in front of the office. So I put the recorder back in its case and off we went. It is an interesting display. But we were outside then, and hopes for an audio interview were fading. 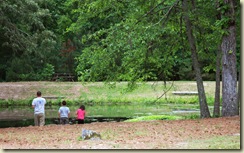 Mr. McCants walked toward the spillway at the end of the lake. On the way we encountered this idyllic family scene. No luck yet, but all three fishing were full of confidence. Poinsett definitely is family-oriented.

But Mr. McCants’ destination was the waterfall at the end of the spillway. Which he described as one of his favorite spots in the whole Park. It is impressive. 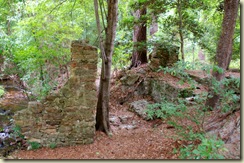 Right above the ruins of the Revolutionary War era grist mill run by the Singleton family here. This is a remarkable site. History all over. Secret meetings held near here, plotting against British rule. 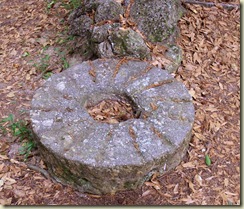 They’ve even recovered and preserved a grinding wheel from the mill. It’s good to see the South Carolina Park Service so interested in preserving historical sites. Preserving them and then making them accessible to the rest of us. 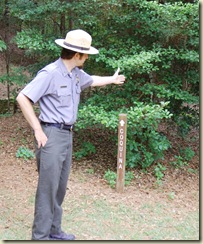 Mr. McCants then suggested we walk the Coquina Trail. A 1.5 mile easy trail around the Lake. I told him my legs were about to give out, and that I had to sit down. He may have recognized the ruse. But he agreed, and suggested we head up to see the recent renovations to the inside of the cabins. I agreed, and we drove up in the Park truck.

I’ve already written about the cabins, and even used some photos taken during our visit there today in the post. They really are something.

After making sure I’d seen every feature, we finally sat down at the table to record the interview. Not Mr. McCants’ favorite thing, I suspect. But I think you’ll agree that he does a fine job of describing his Park and its surroundings.

We began, as usual with personal introduction. Mr. McCants is the first Ranger I’ve met who graduated from Western Carolina. That university has an ideal environment for a forestry-related program.

Then we moved on to Mr. McCants’ career in the South Carolina Park Service. Like many of his colleagues, Mr. McCants served at a number of South Carolina’s parks before assuming his current post.

It wasn’t long, though, before Mr. McCants shifted the focus to his Park. And the remarkable diversity of this 1,000 acres. Including representation of four different areas of South Carolina. Listeners who have never visited Poinsett may be skeptical. Justifiably skeptical. But I assure you it is no exaggeration. Wait until you see the photos I took along the Coquina Trail before passing judgment.

I then asked Mr. McCants about the history of this Park. When and how it was built. The role of the Civilian Conservation Corps. And the unusual – at least to me – coquina stone that was used throughout the Park. The Park occupies land with a long and important history. Part of the Singleton family’s Melrose Plantation. But today we focus only on the recent past. 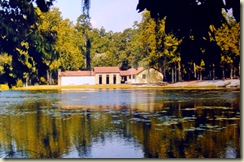 The Park Office building here at Poinsett is one of the most dramatic I’ve seen. There’s evidence of renovation. But I had no idea how detailed the renovation effort actually was. Mr. McCants describes the role of the Park Service historians in re-establishing the look and feel of the original building. And the tea room mentioned before. 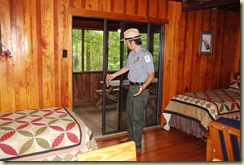 We then turned to Poinsett’s cabins. Mr. McCants explained that four of the Park’s five cabins are original CCC structures. As I noted in an earlier post. And that the interiors of cabins 3 and 4 have been completely renovated. Renovated, but in a way that hasn’t destroyed the rustic “cabin” feel of the place. For me, the screened porch has to be the nicest feature. But opinions will differ on that.

A central feature of Poinsett State Park is its ten-acre lake. I’m hoping to put the ElderKayak in and wet a paddle there tomorrow. First, though, here are Mr. McCants’ comments about the lake, the mill, and his beloved waterfall.

From the lake and waterfall we turned to wildlife in Poinsett State Park. There are lots of wild creatures. Everything from deer to alligators. On the rare side are the river frog and Rafinesque’s big-eared bat. Click that hyperlink if the name of that bat doesn’t ring a bell. And, of course, snakes. Non-poisonous and poisonous. Watch out for the latter. But Mr. McCants said he’s never had a single incident of snake bite at any of the parks where he’s been a ranger.

Again as usual, I asked Mr. McCants to describe his Park’s clientele. He said it is very diverse. Hard to categorize. Lots of local folks from the Wedgefield or Sumter areas, Canadians, Key West Floridians, and even visitors from the American West. Although Poinsett is relatively close to South Carolina’s main interstates, Mr. McCants said this is a “destination” park. Not somewhere to stop for the night on the way to another destination. 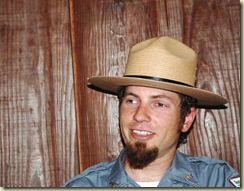 It’s hard to appreciate what Poinsett has to offer without walking its trails. Mr. McCants here gives a good summary of the trails available. I hope to walk at least one of them before leaving and will give a detailed report in a later post.

Finally I asked Mr. McCants about his plans for the future of Poinsett State Park. His reply was interesting. Simply put, he hopes to preserve and maintain these 1,000 acres for future generations to enjoy. No easy task. A day-by-day struggle, I’m sure.

Thanks again, Park Manager McCants for your generous contribution of time and expertise. It’s a great treat to visit your Park, and to meet you and your colleagues.

Click here to listen to the interview with Park Manager McCants in its entirety.