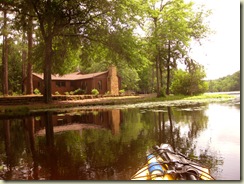 Late this morning I took the Advanced Elements Expedition down to Levi Mill Lake for a paddle. As usual, several folks stopped by to watch the assembly/inflation process. They were delightful conversationalists. So answering questions, and just chatting, extended assembly/inflation time from fifteen or so minutes to nearly an hour.

Once assembled, it was a short walk down to the launch site where the gradually sloping sandy shore made an ideal launch site. Here’s a view of the Lake shoreline from the kayak once launched. 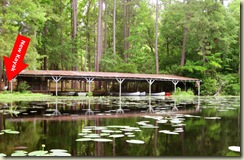 The Park has several canoes and flat-bottomed boats for rent. Very nice ones, in fact. As at other Parks, they provide the paddles and PFDs, [personal flotation devices; no longer called Mae Wests!]. Oh, and look over in the far left of the photo above. That’s a hard-shelled kayak hull you see. Yup! 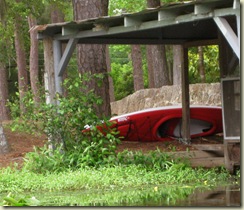 A newly purchased red single-seater kayak that’s also for rent. I was tempted, but didn’t want to offend my Expedition ElderKayak…. Here’s a closer look at the little red boat. Truth be told, I’ve never paddled a hard-shell kayak. Only my inflatables. 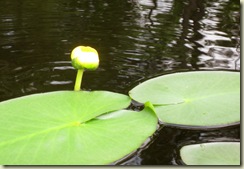 This is a small lake. Only ten acres. And it’s plagued with an over-abundance of water plants. Like every other small Park lake I’ve seen in the System. Here’s an example. They’re beautiful individually. Though they do get out of hand!

But that’s all I could find bad to say about this lake. Paddling here is one dramatic scene after another. Like the cypress tree in the video clip above.

And, throughout it’s full of life. Bass, brim, and the “mosquito fish” Park Manager McCants mentioned yesterday during his interview. Click this link to learn more about those mosquito fish. I’d never heard of them before. Didn’t see any during this paddle. 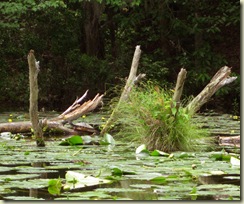 Now, turtles abound. As you see here. Just before I took this photo there was a great commotion in the water that appeared to be made by a school of fish. I tried to get a picture, and hadn’t even seen the turtle! No luck with the fish. The sight would have made any fisherman’s heart go pitter-pat.

The lake has three resident alligators. One around eight feet in length and two considerably smaller. They’re shy. For some reason the Park staff see the smaller ones most often on Thursdays and Fridays. Rarely the larger one. This is where they usually frolic in the water. Unfortunately, they were hiding when I paddled the Lake. Had to make do with the turtles and fish. And the remarkable plant life.

Here’s a view up the lake, from near the site of the waterfall and old mill. That’s a long-abandoned diving platform. Years ago this Park attracted swarms of swimmers. No longer. Natural swimming holes have gone out of style, it seems. The public now prefers clear, highly chlorinated urban swimming pools. So this old concrete diving platform now serves only the resident birds. The same is true at Sesquicentennial State Park in Columbia.

After a delightful paddle up and down the lake, then back again, it was time to take the Expedition out of the water. On the way back to shore, I encountered this interesting sight. The river frog tadpoles mentioned by Park Manager McCants. They were all over! All with legs now, nearly frogs. A close-up lesson in nature.

So, when you visit Poinsett State Park try to include a boat paddle in your schedule. You won’t be disappointed. And if you don’t carry your own inflatable/foldable kayak in the back seat of your car like I do, rent one of the Park’s aluminum canoes, john boats, or the bright red kayak. You’ll have a great time.

Tomorrow I hope to walk the Coquina Trail around this beautiful lake. I’ll take plenty of photos of the diverse scenery along the way. So stay tuned.