Last week I stopped by Columbia’s Riverbanks Zoo to see their elaborate western lowland gorilla exhibit. Click here for some photos and video. 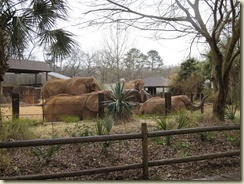 Animal exhibits at the Riverbanks Zoo, though, are like potato chips. You can’t stop at just one. The elephants, for example, live right next to the gorilla exhibit. Riverbanks is home to four female East African bush elephants. In a comfortable setting that includes a bathing tank. 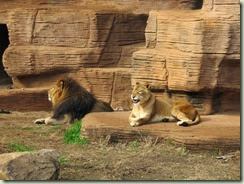 But elephants are just the beginning. Here are a couple of short videos that provide a glimpse of a few of the more impressive displays. Enjoy.

If the videos embedded above fail to display properly in your browser, click the links below to access them directly from YouTube.
Elephants, Grizzlies, and Lions
Vultures, Hornbills, Flamingos, and Baboons
Posted by Robert Angel at 10:50 AM 2 comments 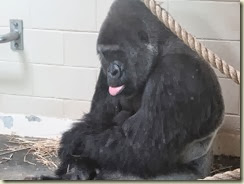 Last week I visited Columbia’s remarkable Riverbanks Zoo again. This time to see “Patrick,” a twenty-three-year-old male gorilla who arrived from Dallas late last year. Click here to read the Zoo’s recent press release on his arrival.
In the event, Patrick wasn’t on display. But I did get to spend time watching the Zoo’s three other male western lowland gorillas:  Chaka, Mike, and Ajari. Ajari’s the youngster of the group at only 13, while Chaka, 29, is the dominant male. I think that’s Chaka you see in the photo above. 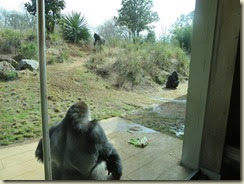 Two USC anthropology students were observing the gorillas and taking notes when I arrived. Field research for a class project, I suspect. They knew a good bit about gorillas in general, and about these gorillas in particular, and kindly explained what was going on.
Here’s a short video I put together from video clips and photos taken during the visit. These are magnificent animals.

As usual, if the video fails to appear in your browser, click this link to go directly to YouTube where it’s hosted.
It’s impossible to walk more than fifteen feet at the Riverbanks Zoo without snapping photos or recording video. More to come, including elephants, grizzly bears, and lions.
Posted by Robert Angel at 12:38 PM 0 comments