Today is Monday, the 10th. Since yesterday was Mother’s Day. When we all enjoyed a splendid Mother’s Day dinner. Thanks, Lisa and Lee! A great time, not to be missed.

So, off today at 8:00 a.m. for Poinsett State Park, the Park System’s third, or second, park, depending on how you calculate. Everyone talks about Poinsett, but this will be my first visit. 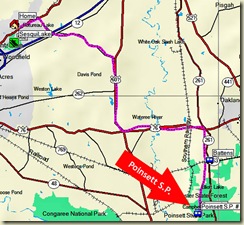 As you see on the map, Poinsett is only 44 miles away. A trip of just under an hour, even using secondary roads where possible. The Garmin GPS routed me around the northeast side of the Fort Jackson area without a hitch this time. Selecting roads with names such as “Screaming Eagle,” “McCords Ferry,” and so on. A pleasant way to go.

Though Route 261 was new to me. It must be another of those long-established South Carolina roads. After the turn-off in the Manchester Forest to Poinsett State Park, 261 continues on down toward the Coast, through Pineville, Manning, Kingstree, and Hemingway. Eventually connecting with Route 701, not far from the beach. I’ve got to learn more about the origins of these South Carolina roads. 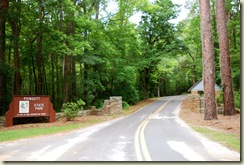 The impressive entrance to Poinsett State Park appears after several miles of pleasant drive through the Manchester Forest. If you have time, pull off the road here and have a look at another example of the CCC’s work in South Carolina. 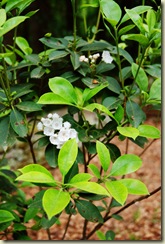 Those of you who know plants likely will be surprised by the bush you see just to the right of the Park sign. Yes, it’s Mountain Laurel! Just past its prime now. But unmistakably mountain laurel. What in the world? 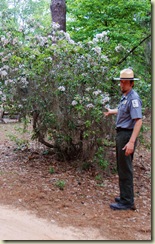 This diversity of environment is a point we’ll return to later on. Don’t be surprised by anything you see when you visit Poinsett State Park. 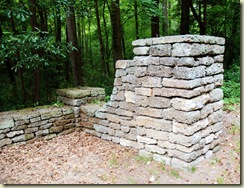 Also take a look at the remarkable stone work here at the Park entrance. Again, the work of the CCC. Completed 75 years ago, it’s been preserved throughout the Park.

The stone here is coquina, a combination of sand, mud, and lime carbonate. The latter provided by the shells of many sea creatures. Yes, sea creatures! When the ocean extended this far inland. As one Park Ranger put it, “This was Myrtle Beach back then!”

CCC work crews discovered a large source of this coquina nearby, mined it, and cut it to shape. 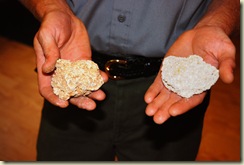 Now, coquina is found in other places as well. Here Park Manager McCants compares the coquina of the Florida Shore – the type from which the Fort at St. Augustine was built, for example – to the coquina found here at Poinsett. That’s the St. Augustine sample in his left hand, on the right side of the photo. It’s “younger,” by many millions of years, and lighter in color. Poinsett’s coquina is darker in color and much older. 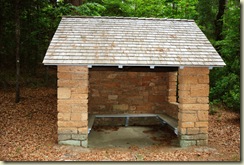 Here’s a closer view of the coquina shelter built by the CCC in the mid-1930s. It’s the small building you see just inside the entrance gate on right side of the road. The shingles and other woodwork undoubtedly have been replaced numerous times. But the original stonework remains. 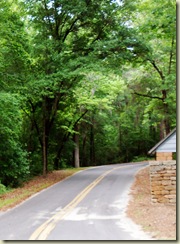 Once you’ve completed your inspection of the entrance gate area – and there’s a lot more to see right here that I haven’t mentioned – drive on along the Park Road to the Campground.

Even this drive is a treat. The road is paved but quite narrow. Which gives the impression while driving that you’re right in the forest. I hope nobody decides to widen the road during future maintenance projects.

Drive slowly and enjoy the views on both sides. Also be prepared to stop suddenly when a deer, or some other Park resident, crosses your path! Animal life abounds here.

That’s all for now. Stay tuned, though, to have a look at Poinsett’s RV campground, and more about this remarkable South Carolina resource.