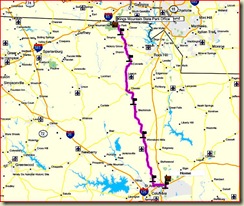 Next stop is Kings Mountain State Park in the northernmost part of South Carolina. Up Route 321, to Route 161 just north of York. Should be a nice drive if the weather holds. That black line you see toward the top of the map photo above is the North Carolina border!

Kings Mountain State Park straddles the Cherokee-York county border. It’s a very big park, almost 7,000 acres, with over 100 RV campsites. I’ll let you know what sort of sites they are once there. This Park too initially was developed by the Civilian Conservation Corps. It will be nice to see more of the CCC Recruits’ wood and stone craftsmanship.

And that’s not all. There’s much more to see here. All within walking distance! The Kings Mountain National Military Park is right next door. The Park commemorates the Revolutionary War battle of Kings Mountain, fought on October 7, 1780. More on that in a moment.

Also, don’t miss the Park’s Living History Farm. This recreation of a typical 19th century South Carolina upcountry farm, is open for self-guided tours seven days a week during this time of year. The Park sponsors frequent demonstrations of 19th century farm life and festivals designed for history students of all ages. None scheduled during my visit, unfortunately. But I’ll still try to get some nice photos and video of the Farm.

Here’s a Kings Mountain State Park newsletter from back in 2007 that provides interesting information about the Living History Farm. Click here for the PDF. There may be later issues of the Newsletter on the Web but I wasn’t able to find any. Will have to ask at the Park.

Now, back to the nearby National Military Park that commemorates the critical Revolutionary War battle of Kings Mountain. Fought on October 7, 1780, it pitted American against American. Loyalists against Patriots. With the latter winning a decisive victory. American Loyalist forces, led by English Lieutenant Colonel Patrick Ferguson, celebrated for the Ferguson rear-loading rifle, were overwhelmed in just over an hour. With all either killed or captured. Read more about Patrick Ferguson here.

This Patriot, or Whig, victory at Kings Mountain came just after serious disappointments at Charleston and Camden. Both decisive Loyalist victories. Kings Mountain ended Loyalist plans for subjugation of the Carolinas. And thereby decisively influenced the whole course of the Revolutionary War. Read a more detailed account from the Historical Section of the Army War College by clicking here. It’s long, and comes in three parts. But it’s interesting reading. Oh, and don’t miss the bibliography at the end.

Lots to see and learn at Kings Mountain. I’ll keep you posted. So stay tuned!