Paperback Version of “Death Long Long Ago” Available on Amazon 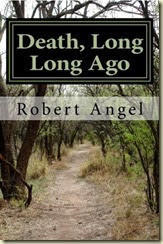 The paperback version of Death Long Long Ago is available now on Amazon.

The good news is that this second volume in the Ray Raether South Carolina Travel Mystery series is only 333 pages! A more reasonable length than the first volume’s 610 pages.

Volume three of the series, “Death From Far Away,” is coming along nicely. Ray and Samantha are enjoying the change of scenery at Keowee County’s Stumphouse State Park way over in the western part of the State. Another beautiful Park with views of real mountains, and an interesting Park-hosted museum. Stay tuned.

“Death, Long Long Ago” Available on the Amazon Kindle Site 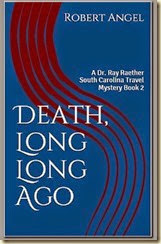 The second novel in my “Dr. Ray Raether South Carolina Travel Mystery” series is available for download as an e-book from Amazon’s Kindle site. Here’s the link for download.

You don’t need a Kindle to read “Death, Long Long Ago.” For other devices simply follow the instructions on the Amazon purchase page. Most anything with a screen and internet access will do. Even smartphones!

This second novel in the series isn’t as long and, I hope, a better read. Experience; experience! Just over 300 pages. It’s written for adults, but the content is appropriate for younger readers as well.

Ray Raether and his constant canine companion, Samantha, return to Iroquois State Park for a few days of camping in their Aliner RV just two months after their earlier visit. Only to become involved in yet another murder investigation. Iroquois County Sheriff’s Department Chief of Detectives, Salvatore Patrick Ryan, asks Ray to help him discover who murdered Steve Crane, then buried his body in the grave of Revolutionary War Patriot Hero Colonel Jedidiah Hathaway.

For those you you who insist on hard copy, a paperback version should be available on Amazon in a couple of weeks.

Here’s the book blurb from the Kindle site:

“Earl! Monty! What do you think you’re playin’ at?” Iroquois State Park Assistant Manager Valerie Simpson shouted as she sprinted through the woods toward her two German shepherds. “Stop this instant! You’re actin’ like a couple of terriers.” But the usually obedient Earl and Monty continued their high-pitched yipping while digging frantically in soft sand beside an upended grave stone. Why wouldn’t they stop?
Then in the early Sunday morning light she saw it. Earl and Monty had uncovered a death-gray human hand and forearm. Palm up, fingers slightly curved. Just a shade lighter than the surrounding sand. Dead for sure, Valerie thought as she apologized to her canine companions for shouting. “You knew I had to see it, didn’t you. Good boys.” The dogs stood stiff-legged back a ways from the grave now, tails straight down, looking back and forth from Valerie to the partially buried human hand.
A grave desecration on Park land was a certain PR disaster. And this wasn’t just any grave. This was the burial site of Revolutionary War Patriot Hero, Colonel Jedidiah Hathaway. He’d been killed at the Battle of Moncks Corner in 1780. But he remained Iroquois County’s most celebrated citizen.
That hand, though, wasn’t Colonel Jedidiah’s. It was far more recent. Covered with only a few inches freshly dug sandy soil. Somebody had buried a recently dead corpse out here right above the Colonel’s casket.
Valerie choked down the bile burning her throat, pulled out her cell phone, and dialed the Iroquois County Sheriff’s Office, hoping she didn’t sound as frightened as she felt. This was a crime scene. Probably a murder scene. She needed law enforcement backup, and needed it fast.
Dr. Ray Raether heard about the bizarre discovery early that afternoon when he and his constant canine companion, Samantha, checked in for five days of camping in their little Aliner RV. They’d visited this Park only a couple of months ago. This very site. After which Ray had published several blog posts about the county and town of Iroquois. The posts had been well received. This time he hoped to collect enough information for a series of longer articles. Well, and also hoped to enjoy a few more breakfasts and lunches at Sadie’s Restaurant in downtown Iroquois. Served by Marge, Sadie’s irreverent waitress of indeterminate age.
Last trip he’d met Chief of Detectives, Salvatore Patrick Ryan, a retired New York City police detective now working for the Iroquois Sheriff’s Department. They had become friends, and Sal had invited Ray to help interview several difficult suspects in an unusual murder investigation. Ray’s long experience collecting and evaluating sensitive information had helped solve the case. Maybe Sal could use his help again. Last visit, working with Sal, Ray had met Iroquois citizens who never would have agreed to an individual interview. It might work again. Well worth the time.
Ray’s hopes were realized. Discovery of the body at the Revolutionary War hero’s grave gave the investigation an unusual degree of sensitivity in history-conscious Iroquois County. As Ray helped Detective Sal Ryan untangle the web of ancient and recent secrets he met even more of Iroquois County’s colorful but reclusive residents. Always accompanied by Samantha, the 110-pound American Alsatian whose wolf-like yellow eyes seemed to see and understand everything.

I recently had an errand that took me across the river to West Columbia.

On the way back I stopped at the Botanical Gardens. These gardens are part of the Riverbanks Zoo complex. A zoo admission ticket also admits the visitor to the gardens. And vice versa. With the new pricing structure an annual pass is a better bargain. If you visit the zoo or gardens four or more times.

Here’s a video of the visit. Enjoy.

Should the video fail to play properly in your browser, click here to go directly to YouTube.