Most everyone would agree that it's nice to have a hot cup of tea or coffee with lunch during extended kayak paddles. More than nice! Think of a small island near the middle of a peaceful lake.... Bald eagles circling overhead. Loons calling. A pristine sandy beach. Easy kayak take-out, and so on! 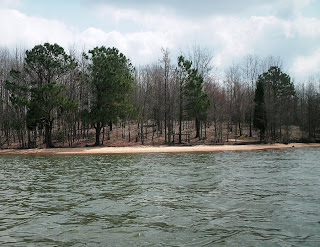 Usually, though, we end up settling for a swig or two of tepid-but-safe water from our ever-handy water bottles. Or, for something hot from a thermos. Or hottish, but tasting suspiciously of the thermos's last mission.

Enter the "Kelly Kettle." These lightweight battle-tested water boilers are made in County Mayo, Ireland. By a family-owned firm that does business all over the world. They've been at it for four generations, these Kellys, according to the blurb on their website [http://www.kellykettle.com/homepage]. If you send them an e-mail you'll hear back from someone named -- well ... "Kelly"!

Judging from the dozens of YouTube and blog entries, these Kelly Kettles over the years have inspired a near-fanatical following. I first learned of them from Tamia Nelson's http://www.tamiasoutside.com/] website. Then, two hours of "research" on the web convinced me life without a Kelly Kettle was hardly worth living. Day-trip kayak living, anyway. Possibly even dangerous! Why, think of the temptation to suddenly guzzle down a pint or two of un-boiled water ..... (Yeah, pretty weak, I know. Hardly persuasive. It inspired only a derisive snicker when I trotted it out at home .... )

But, in spite of protests from the family Bureau of the Budget, I ordered a medium-sized Kelly Kettle directly from the company, paying through PayPal, which is safe, simple, and eliminates the problem of exchange rate calculation.

The kettle arrived in just a few days. While I was traveling away from home, as fate would have it. All of that effort to train the UPS delivery truck driver to stop a bit down the street and toot quietly, was wasted .....

Just yesterday, I was able too give the Kettle its first test firing. Here at home, in the yard. Just in case. Not to worry. It performed beautifully.

Here's the Kettle and all of its accessories enclosed in the nice green carrying bag that arrived as part of the package. 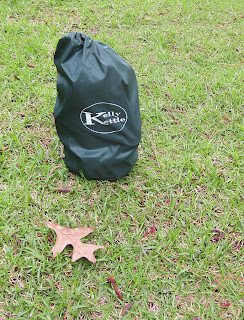 It's small enough to pack up and tuck in the front or rear of most kayaks. As important, everything but the grill, cork, and cork chain, is made from aluminum. So , it's lighter than you might expect. Here are all of the pieces that came with the kettle. The two-piece grill, the pot, the pot cover/frying pan, and the handle all seemed sturdy enough to survive hard use. Though time will tell. 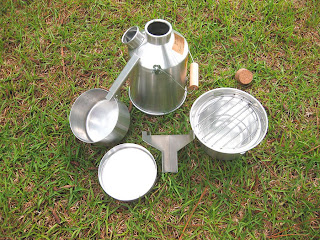 Here's another shot of the Kettle's two main components: The kettle itself and the fire pot upon which the kettle rests as it heats water. 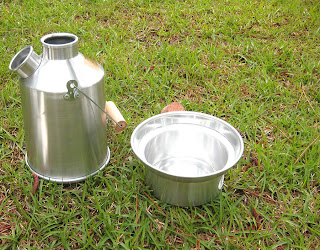 At last, all was ready! I filled the kettle to just below its spout, religiously following the printed instructions. Back in the yard, I gathered several pieces of thick cardboard, some sticks and twigs, and a semi-soggy pine cone. We'd had a nice rain for most of the morning, so everything but the cardboard was fairly moist. An even better test, I thought!

I stuck a propane camp lighter through the vent hole in the fire pan and managed to get a piece of that bone-dry cardboard to burn. Almost immediately, a satisfying plume of whitish smoke rose from the kettle's chimney. I punched the "start" button on the stop watch. This test would be a total success!

Encouraged by the impressive plume of smoke, I shouted for my wife, the aforementioned budget director, to come out to watch before she missed the whole performance. "Why?" she replied. "One of us has to work. And don't burn down the house with that thing!" "That thing" said it all. 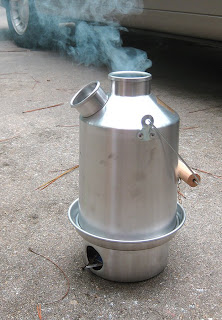 Well, you can never tell. As it happened, her insensitive response was a blessing in disguise. The kettle smoked for a while. But then it stopped. I applied the propane lighter to the charred cardboard once again. A little more smoke. Not as much as before, however.

I repeated this exercise until the propane lighter refused even to spark. Let alone light. And the driveway was filled with the acrid stench of partially burned paper. That smell raised humiliating childhood memories of church camp lessons in how to start a campfire. Lessons I never mastered. The very same smell. How could one forget!

Well, nothing for it but to begin over. I dumped the charred cardboard on the damp grass near the driveway and gave it a good sprinkling of water. Refilled the kettle, and re-built the fire. This time I simplified everything by balling up two sheets of typing paper. And placed them individually in the bottom of the fire pan. To avoid the tightly-stacked-cardboard syndrome. I then sprinkled twigs, leaves, and other near-dry lawn debris atop the balls of paper. Reserving the larger twigs to drop down the Kettle chimney once the fire started. 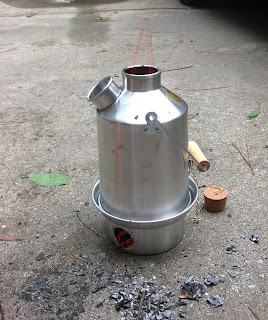 One more shot with the propane lighter and the pot was ablaze. Reset the stop watch. It worked! The photo above shows flames leaping from the Kettle chimney. The water reached a full boil in 3.25 minutes. With very little fuel. Just some twigs and those two sheets of typing paper! Wonderful! This done by someone suspected as a child of contributing to the clinical depression of his church camp counselor. A person who as an adult usually required help to light the wood in the living room fireplace! Nothing to it with the Kelly Kettle! Just remember to bring along a couple sheets of typing paper. Twenty-pound weight worked nicely for me.

So, is the Kelly Kettle worth it? I certainly believe it is. What an addition to one's kayaking kit. I can hardly wait to try it out next week while camping at Modoc, South Carolina, on the shore of Lake Thurmond. I may even bring along some prepared foods to cook atop the kettle in that attractive aluminum pot. Who knows! Maybe even a hot dog for the little grill. It looks perfect for that applicataion. 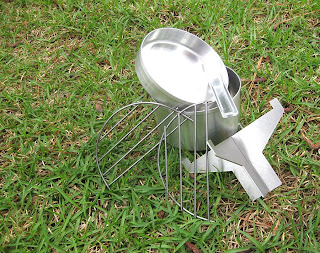 Posted by Robert Angel at 9:38 AM 1 comments