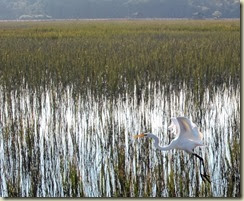 Huntington Beach is one of South Carolina’s most popular State Parks. I don’t have the visitation figures at hand, but it has to be right up there near the top. And with good reason. Lots to do here.

I come to RV camp and write when I can get a site for five days. But that’s only the beginning. Punch “Huntington Beach” into the search window over at the right and you’ll find plenty of articles. Including an interview with Naturalist Mike Walker. Also a tour of the Atalaya mansion with then-curator, Elizabeth Moses.

But for me, the long curving wooden boardwalk out over the marsh takes the cake. It’s a must-visit feature of this Park. I’ll put in a short video below to give those of you who haven’t visited some of idea of what’s in store. But the marsh on either side of this boardwalk has been different every time I’ve visited. Indeed, it’s different at high and low tide on the same day.

If your browser has difficulty with the embedded video above, click this link.

Back at the South Carolina State Fair. Click here for Part 1 of this visit to the Fair if you missed it first time around.

I’m using a new program to create short YouTube videos from video clips and photos. Sound too! PhotoStage Slideshow Pro. These shareware programs get better every year. However, they also become more complex. So it takes some time to become proficient. Bear with me, please …. The clips this program produces will play full-screen on your desktop if you view them on the YouTube website.

There was so much to see this year at the State Fair I had to go back for a second day. And then only got to see a fraction of the exhibits.

Farmer Bob came by, driving “Johnny,” his beloved 1949 John Deere Model MT tractor. At least one faithful reader of this blog collects antique tractors. So, click here for everything you ever wanted to know about this ‘49 John Deere.

The Cantey Building, not far from the rear entrance on the right, houses many of the exhibits related to agriculture. It’s another must-see. Air conditioned too! Here’s a link to the Fair’s on-line history that describes the importance of agriculture in developing state and county fairs. Wouldn’t have happened without agriculture! At least, not in this form.

The Ellison Building, just across the way from Cantey, has air conditioning too. Here you’ll find many of the more spectacular exhibits of flowers. And an enormous sand sculpture. These folks take their flowers seriously. I’ve never seen such an impressive display of orchids. Kids will find plenty to amuse them here as well. Have a look.

So there you have it. Or a glimpse of it, anyway. The 2013 South Carolina State Fair. Something for everyone to enjoy. I recommend it for folks of all ages.

Stay tuned to this channel because next time we’ll visit a Japanese restaurant that’s become an institution here in Columbia, South Carolina. 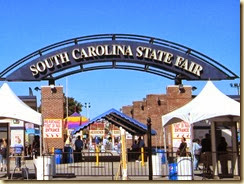 Last week for the first time in years I was able to attend the South Carolina State Fair. For two days, in fact. What a treat! Somehow, the organizers manage to provide a comfortable environment for all ages, from little ones in strollers to old geezers like me. Below are some photos and videos from the visit.

Arrival in the Free Parking Area

There were so many photo and video opportunities I’ve had to combine them into YouTube videos. Click on the arrow in the photo above to watch and listen. You can play the video full-screen by clicking the icon in the lower right-hand corner, just to the right of the YouTube logo. Seniors get in for $7.00. Not a bad price for a day’s entertainment.

But this Fair isn’t all about seniors. Kids of all ages seemed to be having the most fun. Here are a few of the rides intended for the stroller set and a bit older.

Rides for the Stroller Set and a bit older

Rides of the spinning slingshot variety, intended for older children and young adults, were in another section altogether. I didn’t make it over there.

If you don’t have time to see anything else, be sure to visit the barns where cattle and smaller animals are displayed. 4H and FFA are active in high schools throughout the State. Great training for young people. Here are some scenes.

Some animals exhibited at the South Carolina State Fair

Stay tuned for some more scenes from the South Carolina State Fair. I enjoyed the visits. Great way to procrastinate from writing the second novel in the Dr. Ray Raether and Samantha RV travel mystery series. Better get back at it!

Interview with Leo Redmond, Director of the Cayce Historical Museum 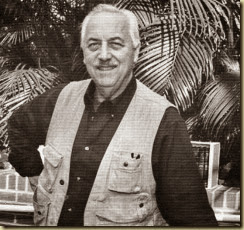 Last Friday I was able to persuade Mr. Leo Redmond, Director of the Cayce Historical Museum, to sit still long enough to do an audio interview. Here is the result.

Mr. Redmond is a remarkable man. He was born and raised right in Cayce, and has lived there all his life. Click that button above to hear Mr. Redmond describe his origins.

Leo became interested in the history of his part of South Carolina not as a student, but as an adult. A busy adult. Never a man to do things by halves, he studied that history from the earliest period of human habitation down through the 19th and even 20th centuries.

He began with artifacts he found hunting with a metal detector. Those discoveries led him to library and archival research. That is, Leo began with the artifacts and then turned to written interpretation and analysis. Not the other way around, as is more common with academic careers. That, I believe, has made him a more interesting guide to the Cayce region.

I asked Leo to describe the origins of the museum in which we were recording this interview, beginning with the building. Above you see two views. On the left is the original building in its later days, and on the right the replica built by John Ellisor and his Committee, including Leo Redmond. Click the button to hear Leo tell this interesting story.

I asked Mr. Redmond what made the Cayce area so special. True to form, he began, James Michener style, with flora and fauna.

I then asked about early European settlers, expecting Mr. Redmond to describe the Town of Granby. That, however, would have short-circuited the story. Click here to learn about much earlier Spanish visitors to the area.

Leo proceeded from the Spanish to the Saxe Gotha settlement effort. An impressive idea, ideally located. But for reasons Leo gives here it never flourished. Click here for a more detailed description of the Saxe Gotha experiment. It’s from an excellent source, the “Carolana” website. No, that’s not a typo. Click the link above to find out why.

At last, Leo reached the Town of Granby in his narrative of this region’s history. Even allowing for a certain amount of personal bias, Granby had to be a flourishing town by the mid-eighteenth century. I mean! Two hotels? And even a toy shop? This was a community prosperous and well established.

Which brought up an important historical question. Once South Carolina developed inland to the point early settlers began to think about a more central location for their capital, why wasn’t Granby, a thriving town in the graphical center of the state, selected rather than Columbia? Leo explains here. Again, click the button to listen. 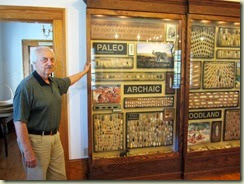 Long-time readers of this blog may recall posts I’ve done on early Southeast American Indian archeological sites. Especially a tour of American Indian mounds in the Southeast in early 2010. I’m certainly no expert in this area. Just an interested observer. But none of the museums I visited during that trip have exhibits that compare with what you’ll find upstairs at the Cayce Historical Museum. 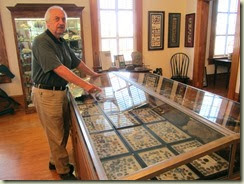 Here, Mr. Redmond explains the origins of pieces in that exhibit. Cayce was fortunate to receive the Watson family’s collection. But Leo himself contributed a significant amount of his own collection to complete the display. This single room of the museum alone is a must-see next time your travels take you near Cayce, South Carolina. 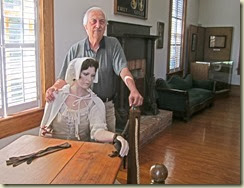 If that’s not enough to bring you to Cayce and this museum, have a look at the photo above. That’s a full-sized image of Emily Geiger, an important Patriot heroine of the Revolutionary War. Click the button to hear Leo describe this local event. Remarkable. Only eighteen years old at the time, Emily Geiger’s courage influenced the course of the Revolutionary War. It’s an inspiring story. 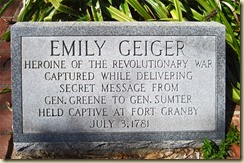 In the report on my first visit to this museum back in early September I mentioned a mystery table, and promised to describe it in a subsequent post. 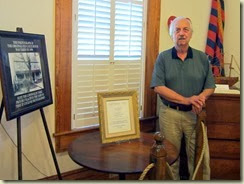 Well, here it is. And we have Museum Director Leo Redmond to describe it to us. A card table owned by General Cornwallis that he was forced to abandon.

Thanks to Museum Director Leo Redmond for his time and expertise. The Cayce Historical Museum is well worth a trip to Columbia – ‘er, Cayce – South Carolina.