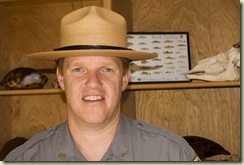 Today I tracked down Mr. Paul McCormack, Regional Chief for the Sand Hills Region State Parks. He lives not far from us. But he’s usually on the road, or visiting one of the fourteen Parks he supervises. Today, though, he happened to be just across the road at the Sesquicentennial State Park Office. And he kindly agreed to sit down for a few minutes to do an interview.

I often mention how busy South Carolina’s Park Rangers are. So it becomes almost a cliché. Really, though, they are. Especially during this difficult period of budget austerity. For example, our treasured Sesquicentennial State Park here in Columbia at the moment appears to be short two fulltime employees. And that’s out of a very small full-time crew at the best of times. So, to keep things running, everyone has to pitch in and help. Even including any visiting regional managers!

It’s encouraging to watch how well these folks cooperate to get the job done, and to see how much they accomplish. Leveraging every asset they have. Speaking of assets, all of the Parks welcome volunteers. Just contact your local Park, let them know the times you could be available, and mention any special skills you may have. It’s a great way to get outdoors, to meet likeminded people, and to make a meaningful contribution to your community. Many of the Parks also have openings for campground hosts. Another great opportunity to serve while enjoying the out of doors.

Mr. McCormack, as he tells us here, was born and raised in Massachusetts. Now, we usually think of Massachusetts as one big city. Or at least I do. But they still have some wooded areas for outdoor activities. Mr. McCormack made the most of those opportunities. And for nine years worked summers at Boy Scout camps, helping younger Massachusetts folks learn the joys of a life out of doors. 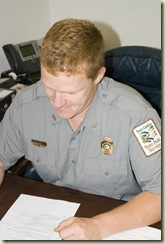 It was undergraduate study at the Citadel that brought Mr. McCormack to South Carolina. At the Citadel he majored in education, intending to prepare for a career in which he’d continue helping young people learn to enjoy their natural surroundings. But he happened upon a Park Service recruiter who introduced him to a career that broadened his potential student population to all ages. Fortunately, here in South Carolina.

This was a good time to ask Mr. McCormack to describe his career in the South Carolina Park Service. It’s an interesting story. Not long after graduating from the Citadel he began service at Sergeant Jasper State Park, near Hardeeville, South Carolina. It’s now a Jasper County Park. But at that time it had two state employees, and not many visitors. A good place to learn all aspects of state park management.

That was in 1995, and lasted only a couple of years. From bucolic Jasper County, Mr. McCormack went to Myrtle Beach State Park. The Park that attracts more visitors than any other South Carolina Park. There Mr. McCormack served under legendary Park Manager Bobby Turner. Eventually becoming his Assistant. Hard to find a better mentor. 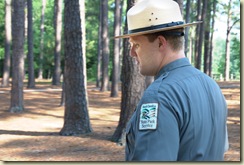 I tried to get Paul to complain about the frenetic atmosphere at Myrtle Beach. But he declined. Said he enjoyed his years there. Learned a lot about Park management from Mr. Turner. And noted that in addition to the large RV campground, Myrtle Beach State Park’s 312 acres includes some beautiful oceanfront maritime forest, as well as the beach and its ocean life.

After two years at Myrtle Beach, Mr. McCormack became Park Manager at Paris Mountain State Park, just outside Greenville. What a change! The opposite side of the State. And one of the most beautiful parks in the whole System. Right next to the City of Greenville. I look forward to visiting Paris Mountain week after next.

Then in 2001 Mr. McCormack assumed his present regional chief responsibilities for the Sandhills area. Quite an interesting career.

I then asked Mr. McCormack about that change in responsibility. How the work of a regional chief is different from that of a park manager. A hard question to answer. But his answer was interesting.

First, a lot more driving! His region follows the fall line from near the North Carolina border to near the Georgia border. With the Sandhills Region’s diverse Parks. But the key to the job, as Paul described it, is personnel. What we now call human resources. The selection, motivation, and evaluation of people. 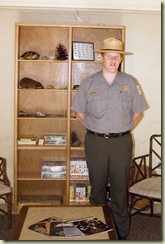 Now, that response is similar to what one would expect from a senior-level manager in most any enterprise. But it seems to me that senior Park Service managers have additional challenges that Paul didn’t mention.

First, the limited pool of people with the combination of skills, training, and personality necessary to run a State Park successfully. There are very few such folks around. Second, the severe limitations on financial rewards. Especially in times of budget adversity. Nobody joins the Park Service for the money! But everyone has to survive. There are other differences as well. But for Paul, the central challenge is personnel management, and that makes sense. 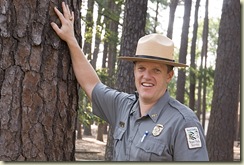 I then asked Mr. McCormack about South Carolina’s State Park system overall. From his perspective near the top of the bureaucratic pyramid. As expected, he said the system includes 47 parks, distributed throughout the State, comprising a total of about 82,000 acres. And went on to mention the considerable economic impact of the Parks on their surrounding community.

Even more interesting, Mr. McCormack stressed the importance of the State Parks’ less tangible contributions to the quality of life in South Carolina. He quoted his supervisor’s description of the Parks as “a tonic for the soul.” And added that “Not everybody owns a hundred acres. But every citizen of South Carolina owns 80,000 acres in their State Parks.” It seems to me that comment says a lot about how the Park System’s senior management think about the Parks under their care. 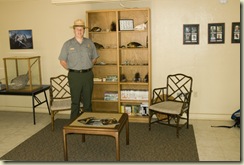 Paul then described State Park visitors. He said visitation depends very much on the Park. Myrtle Beach, for example, attracts visitors from all over the country. While some of the smaller Sandhills Region parks attract a more local crowd. Listening to Paul describe local RV campers at Little Pee Dee State Park, I recalled conversations with other campers while visiting there recently. They really were almost fanatical about their Park. And most generous in their praise of the Rangers. It was “their park.” No question about it. Definitely part of their 82,000 acre spread! 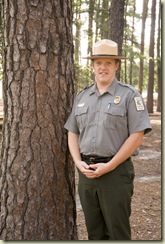 By this point we had considerably exceeded the time originally agreed upon for the interview. But I wanted to hear Paul’s advice to young people who might be considering a Park Service career. Wanted to get his perspective as a regional chief.

Paul agreed that the Park Service is more of a calling, or lifestyle, than a work-a-day job. He said his Rangers would be unlikely to remain on the job without some payment. But that none of them are motivated primarily by money.

Paul mentioned the importance of a four-year college degree. And that it’s hard to get interviewed without it now because so many people apply with degrees in hand. The majors he mentioned were forestry, resource management, and even business management. But I’m sure he would have mentioned others had time permitted.

As important, he said “… you’ll learn the job on the job.” That is, the highly specialized sort of work required of Park Rangers can’t be learned in school. But the four-year degree is part of the preparation now necessary to be competitive. 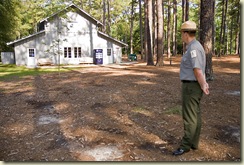 Thanks again to Sandy Hills Regional Chief Paul McCormack for taking the time today to talk with CarolinaConsidered. Lots of useful information, and it’s been a pleasure.

Click here to listen to the interview without interruption.