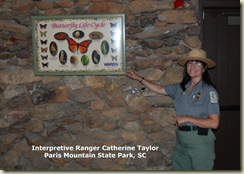 According to the Park Service website, interpretive rangers are responsible for “educational and interpretive programming” for their Parks. They develop “educational/interpretive plans,” as well as promote and direct “tours, programs and workshops.” 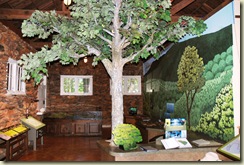 They also assume responsibility for creation and maintenance of Park exhibits. Now, if that isn’t enough, in addition, interpretive rangers coordinate community and volunteer programs. Whew! That’s a full plate for one individual.

I’ve included all of this boilerplate job description detail to give you some idea of the importance of interpretive rangers to the outreach programs of their Parks. They constitute an essential component of the Park’s interaction with the public when a Park is fortunate enough to have one on staff. 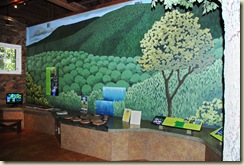 Speaking from personal experience, I’ve learned more about the natural environments of South Carolina’s various Parks from interpretive rangers than from any other source. Without exception, the ones I’ve met have been both knowledgeable about their Park’s environment, and able to communicate their specialized knowledge to non-specialist members of the general public, like me. That’s a gift! 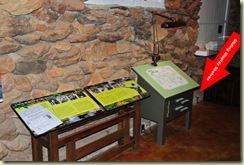 The photos above are of the lobby display area at Paris Mountain. They don’t do the subject justice. But I hope you’ll get some idea of just how carefully these displays are planned out. Especially given strict limitations on funding AND on space.

The photo with the red arrow above provides an excellent example. Give it a click to see the larger image. It’s entitled “Greenville’s Big Backyard,” and describes how Greenville’s residents have used the Park since its creation. Also, the easel-like table on the right explains how the Park was developed. Each of the handles below the easel pulls out to provide detail on a particular aspect of Park creation. Talk about efficient use of space! This exhibit, like all of the others here, also is tough as iron. What we call “kid-proof” in our family. Children as well as adults are encouraged to touch. 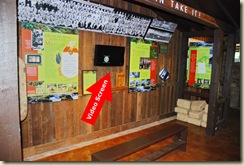 The photo above is of a very special exhibit at the Paris Mountain State Park office lobby. It provides all sorts of information about the CCC origins of this Park. Click for a larger image and notice the beautifully restored panorama photo of the crews. Also note the wide video screen just below. That’s important. A push of a button will allow you to watch several videotaped interviews with former members of the CCC crew! This exhibit alone justifies a visit to Paris Mountain State Park. 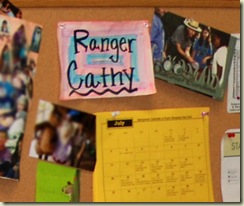 I wish there was more time to describe these displays. But we must move on to the interview with their creator, Interpretive Ranger Catherine Taylor. Or, “Ranger Cathy,” as she’s affectionately known to many of the thousands of South Carolina school children who pass each year through her very special “hands-on” nature programs at this Park.

Ranger Cathy agreed to do the first interview in this new CarolinaConsidered series. [And then graciously agreed to do it a second time when I accidentally erased the tape from the first try! Oh my. Every writer’s nightmare. Thanks Cathy.] 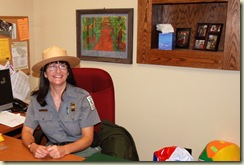 We began, as usual with some personal details. Her childhood in Georgia and Florida with plenty of outdoor activities. Then graduate school at Clemson, where she received her advanced degree in “Environmental Interpretation and Resource Management.” She’s been at Paris Mountain for about eight years now, before that working at the Greenville Zoo and Roper Mountain Science Center.

A parenthetic note here. Ranger Cathy is a natural teacher. That may not be her job title. But she is. One of those unusual people able to teach adults as well as children. I think you’ll see this as we continue with the interview.

Next I asked Ranger Cathy to explain just what an interpretive ranger in the South Carolina Park system is expected to do. And how that differs from a regular park ranger. “An interpreter connects the visitor to the resource,” she said. As for the primary difference she said, “I think I get to do all the fun stuff.” Now, that’s a real naturalist talking! I also discovered that interpretive rangers are responsible for the wayside signs we see along the trails and elsewhere in Parks.

Incredible as it may seem, Ranger Cathy and her volunteers provide Park environmental education to around 5,000 individuals each year. 4,000 of them come from the school programs that integrate field trips to the Park in their curriculum. And, of course, most of those folks are concentrated into the nine non-winter months. That makes the rest of the year even busier.

The Statewide Discover Carolina Program brings second and fifth-graders to Paris Mountain for Ranger Cathy’s programs. As you can see in the short videos above, she’s prepared for them. Her classroom area is full of equipment and exhibits designed for the younger set. 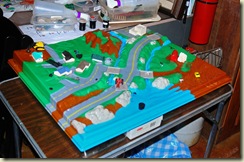 I asked Ranger Cathy to identify the aspect of her work at Paris Mountain that she was proudest. She answered without hesitation her programs for the schools. She really enjoys hands-on environmental education for children.

Getting them “out in the creek,” as she put it. Getting them involved. Don’t know about you. But I don’t think I’d enjoy taking a class of second-graders out to a creek. Let alone fifth-graders! Her greatest regret, on the other hand, is having to reject requests from teachers for their classes to participate in the Program. Much more demand than supply, it seems. 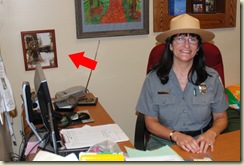 A moment ago I mentioned the CCC exhibit in the Park Office lobby. When I mentioned it to Ranger Cathy she said she has a special interest in the work of the CCC.

Her Father as a very young man served in the CCC! So she grew up hearing stories about his experience there.

The red arrow in the photo above points to a photo of him in his CCC uniform. Ranger Cathy after her arrival at Paris Mountain therefore devoted considerable time to research on the history of the CCC’s activities here. Which resulted in the display and those four oral history videotapes now available for viewing at the Park.

I then asked Ranger Cathy more about the interpretive ranger program state-wide. She confirmed that the State Park System maintains interpretive rangers at about 20 of the Parks. And in addition there are a few regional interpreters. More would be nice. But there are serious personnel and budget constraints on all aspects of the Park Service program.

In closing I asked Ranger Cathy to give us her thoughts on the Paris Mountain State Park environment.

Thanks again to Interpretive Ranger Catherine Taylor for her generous donation of time and expertise to the CarolinaConsidered Project. I couldn’t ask for a better first interview for this new series.

Click here to listen to the full interview without interruption.