Off to Paris Mountain State Park this morning on schedule. Well, even a little ahead of schedule. The on-line maps and GPS all estimated driving time of two hours even. If I agreed, that is, to take the superhighways. I-26 and 385 were key in their plan.

South Carolina, like most of the rest of the East Coast, has been hot as the dickens the past few weeks. Today was no exception. So it was mostly sunny throughout the trip. With the air conditioner more than justifying the expense of a recent repair.

Of course, as everyone in South Carolina knows, but I had forgotten – again! – I-385 is still under construction. And therefore closed at the turn from I-26. This is the second time.

Thank heaven for the new GPS. It immediately recalculated a new route to Paris Mountain. One that integrated stretches of I-26 north, but also included some more interesting side roads as well. It would have taken me quite a while to work it out with a hard-copy map. 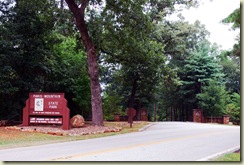 The recalculated route took an additional 20 or so minutes. But before I knew it, there was the big recently painted Park sign. 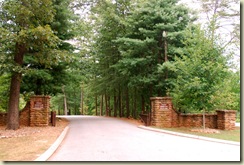 And then the welcoming gates. Now, click on that photo above to get a closer look at the front gate. Beautiful stone work done in the 1930s by the CCC. And since, beautifully maintained by the Park Service. This look doesn’t just happen! It takes a lot of effort to maintain. 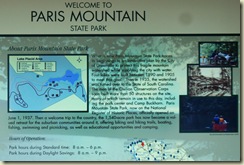 Many of its partisans insist that Paris Mountain is the most beautiful Park in the System. I’ve never seen a fist-fight erupt over the issue. But have seen sharp words exchanged on at least two occasions. 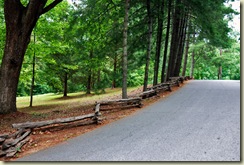 A reputation like that makes one suspicious. Well, makes me suspicious, anyway. But this Park really is a gem. The photo above is just one example. Every scene along the winding entry road as I made my way into the Park was like this.

The fact that Paris Mountain’s 1,540 acres are just a few miles from the center of downtown Greenville, one of South Carolina’s largest and most vibrant cities, alone makes it unusual. But this Park would shine in any location.

In fact, one could use its proximity to a large urban area, and its high day-use visitation, to justify litter and broken-down facilities! Obviously not needed here. 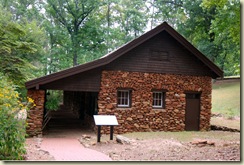 I first stopped for campsite check-in at the Park Office. The parking lots – three of them – were full. I was lucky to find a place to park the car with Aliner attached. The primary attraction today seemed to be swimming in the small lake maintained by the Park. One of the few remaining Parks in the System where the swimming tradition continues. 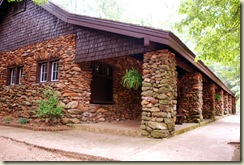 If you see nothing else at Paris Mountain, you must see this Park Office and Education Center. 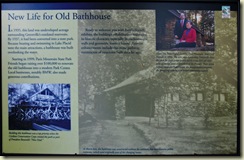 The building began life in the 1930s as one of the CCC’s celebrated bath houses. And served that function for many years. In 1999 Mary Lou Jones and others formed the Paris Mountain State Park Friends organization, and began to raise funds and ideas for their Park. I hope to interview the current Friends Group president here later in the week to learn more about their activities. 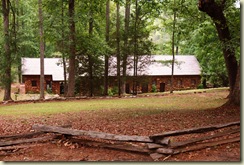 One of those ideas was dramatic renovation of the CCC bath house. The renovation was completed in 2007. Paid for by the Friends Group with the help of BMW, one of Greenville’s largest employers. As you see in this photo, the CCC sited the bath house part way down the slope toward the small lake where folks would swim after changing.

Navigating that slope requires walking down quite a long set of CCC-built stone steps. If you can possibly manage, though, it’s effort well spent. Here’s a short video that illustrates why.

Maintenance and repairs to the stone stairs are obvious here and there throughout its length. 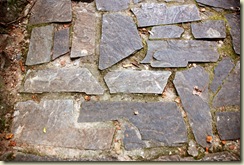 Fortunately the Park Service has resisted any temptation to smooth everything over with non-slip rubberized concrete, or the like. Or to remove this delightful feature altogether. It is a gem, and will prepare you for the renovated stone-built bath house. 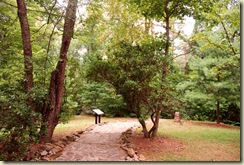 Be sure to notice the shrubbery and trees on either side of the steps as you go down and/or up. [Up, by the way, was easier on my knees than was down.] Here’s one view from near the top of the steps. 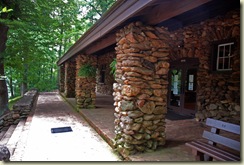 Visitors who find the stone stairs impossible to navigate still can enjoy this remarkable structure. Just park in the small parking lot at the side of the building and walk over. 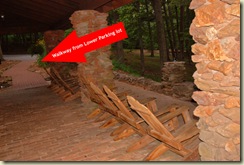 There are only a few parking spots in that lot, and visits there are limited to fifteen minutes. Which certainly isn’t time to see the building. So, have someone drop you off and come back for you later on. Or, if possible, try walking from there up the stone steps. 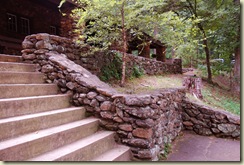 This building, from front to back, is a camera lens magnet. I took dozens of photos from every angle. Stone here was abundant. So the CCC crews made the most of it. And we’re still enjoying the product of their effort. But we’re out of time here. On now to the RV Campground. So stay tuned.