Greenville is just about two hours from Columbia by car. Straight up I-26 and 385, as you see on the map above. It might be possible to avoid the big four-lane superhighways on this trip. But it would take some doing, and a very long time. So, I-26 it is.

Paris Mountain is another of South Carolina’s CCC Parks. Developed in the 1930s. I look forward to seeing the CCC buildings and hopefully some more of the stone work done by those CCC fellows.

Click through the descriptions of the four trails. Everything from “narrow, steep, strenuous, rocky, rugged” to a 1.2-mile “easy-walking, mostly-level, nature-trail loop. Something for most everyone, judging from these SCPRT descriptions, which I’ve found quite accurate. I’ll let you know.

Here’s a map from the Park’s website that shows the trails and most of the Park’s facilities. It looks as if it will easily live up to its great reputation.

Paris Mountain State Park has an active “Friends” group. Click here to visit their website. And click here to read the Friends Group’s 2009 Annual Report. This Friends Group website is full of additional useful information about the Park. I’ve talked with the Friends Group President, Mr. Jason Daly, who’s agreed to meet at the Park for an interview on Wednesday afternoon.

As usual, I’ve telephoned the Park, and e-mailed Park Manager, Mr. Hege, requesting an interview. Let’s hope. So stay tuned. The next few articles on Paris Mountain State Park should be very interesting. 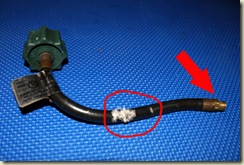 On another subject entirely, you may recall back in June that a pesky Kings Mountain squirrel chewed through one of the Aliner’s propane gas lines. A first! Though RV campers at Kings Mountain said it’s a fairly common occurrence. 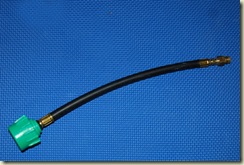 Well, a simple-enough repair. Just remove the offending pig tail and order a replacement. I did. Less than $10.00. 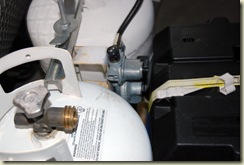 The large green end of the new pig tail fitted nicely onto the propane tank. But the other end, the end that was supposed to screw into the two-way valve that switches tanks, was too small. 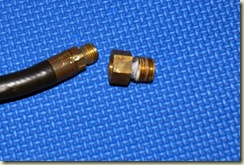 I looked high and low for a brass adapter that would allow me to connect the new hose. No luck. Even the “if-they-don’t-have it-you-don’t-need-it” propane shops here in Columbia were no help.

No luck, that is, until I telephoned “Pro-Tank Supply” in Phoenix, Arizona. I found their website, www.protanksupply.com, via Google Search and looked through. Owner Jerry Harris has included his telephone number on the site, and invites folks to call for suggestions.

I called, ready to leave a detailed message on an answering machine, and was surprised by a human voice. Rare in these days of electric communication. I described the problem to Mr. Harris, and asked if he sold the required coupler. He told me he doesn’t.

Then Mr. Harris said it was likely that I had unscrewed the coupler from the two-way tank switch when I removed the original pig tail. He suggested I go out to the Aliner to check! While he was still on the phone. 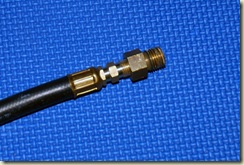 Which I did. And there it was. After thanking Mr. Harris and hanging up, I unscrewed the coupler with some difficulty. Applied new yellow propane-specific Teflon tape, tightened all connections, taking care not to strip the delicate brass threads, and the problem was solved.

Thanks, Mr. Harris of Pro Tank Supply, for your advice and for your patience with a mechanically challenged old RV camper. Even when you had no chance of a sale! Another unusual experience in this age of impersonal, mechanical transactions.

So, check the Pro Tank Supply website when you experience a propane-addicted squirrel attack. Or for some other reason you need parts for your RV propane system. Or, even when you’re not quite sure just what you need. They’ll know what to do.