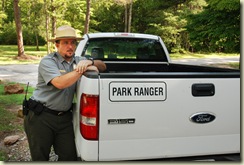 Up early again, and over to the Park Office for an interview with Park Manager John Moon. Lots going on at the Park this morning. But Mr. Moon has made time to chat with CarolinaConsidered for a while. 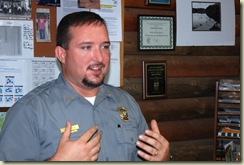 Once settled in at Mr. Moon’s desk, we began as usual with a question about his early life and outdoor experiences.

First, though, a word about that desk. It’s placed right inside the main door into the Park Office. Not toward the back, or closed off. So, when in the office, Mr. Moon sees every person who comes in. I mention this because it illustrates as well as anything Mr. Moon’s orientation to the Park visiting public. Nice to see!

Mr. Moon was born and raised not far from where we now live in South Carolina. He has fond memories of visiting Lake Wateree State Park as a boy. Certainly one of the nicest Parks in the System. And the first at which I camped overnight, many years ago. Once again, we see how important those childhood experiences are in developing a love of the outdoors. 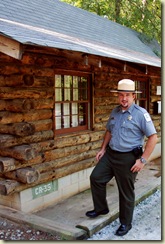 We then turned to Mr. Moon’s career in the Park Service. He was fortunate to begin Park service at Poinsett State Park. As an intern in the interpretive program, working under Ms. Terry Hurley, who now heads the Education and Interpretation program for the whole Park Service.

A two-month summer internship there stretched into eight months during which Mr. Moon gained experience working as a maintenance man and assistant ranger.

His experience at Poinsett illustrates both how difficult it is to join the Park Service as a Ranger, and also the opportunities available to the highly motivated individual. After working at Poinsett for eight months in a temporary capacity that allowed him to experience all aspects of Park service, Mr. Moon was in a good position to be hired there in 1999 as a Ranger One, once a position became available. It takes hard work and persistence to get to wear the hat and badge.

From Poinsett, Mr. Moon went to Barnwell State Park and Santee State Park for a few years. And then on to Lake Warren State Park in Hampton County as Park Manager.

After a decade of service in the Sandhills Region, Mr. Moon arrived here at Croft State Natural Area in 2007. Quite a change from South Carolina’s Sandhills area. I asked Mr. Moon how management of a Sandhills Area Park differs from management of an Upstate Park. Click to listen to his reply. 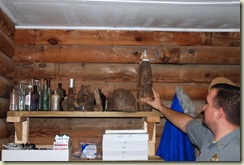 Mr. Moon then gave us his “boilerplate” description of Croft State Natural Area. Like Park Manager Jason Hege at Paris Mountain, Mr. Moon first mentioned his Park’s proximity to an urban area. An enormous protected green space only five miles from downtown Spartanburg. Before visiting Croft I didn’t realize just how close to Spartanburg it was. An interesting point that offers considerable potential for development.

Mr. Moon then turned to Croft’s historical significance. As a World War Two infantry training camp. Leading locals still today to call the area “Camp Croft,” rather than Croft State Natural Area or Croft State Park. And the many small farms the area supported since Revolutionary War days. Evidence of which remains in the nine known cemeteries within the Park, and the stone foundations of farm houses and buildings here and there. Even before that, American Indians lived in the area, maintaining an important soapstone quarry here. 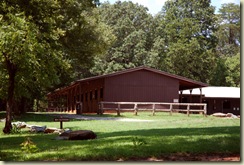 Both day and overnight visitors. Park Manager Moon here describes those resources, including the show ring and 50-some horse stalls for overnight accommodation. And the horse-related events held here, many sponsored in cooperation with the Spartanburg Horseman’s Association. 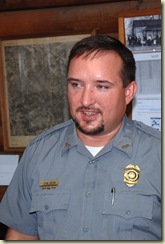 But you certainly don’t need to bring a horse to have a good time at Croft State Natural Area. The picnic shelters and areas throughout the Park are beautifully designed and see heavy use year-round.

Picnic Shelter Number One is home to two beautiful oak trees, as well as all of the facilities necessary for a large group to have a good time in the outdoors setting of the Park.

Mr. Moon then described Croft’s two-loop RV campground and its facilities. He noted the importance of the Reserve America reservations system for the campground, as well as the picnic shelters. He’s right. I use it regularly! He also noted the contributions of the three Camp Hosts. I forgot to mention in earlier posts, by the way, that the Lake Loop of the Campground offers 50-amp electricity.

Conversation then shifted to the appearance of the trees and shrubs all around Croft State Natural Area. Including those beautiful twin oaks as Picnic Shelter One. Park Manager Moon gave much of the credit to Senior Ranger Woody Goodwin. As well as contributions from Regional Maintenance Manager, Brody Davis. “Woody” is a real tree man! This aspect of Croft alone makes a visit worthwhile in my view.

No discussion of outdoor activities opportunities at Croft State Natural Area would be complete without mention of the Palmetto Trail. I asked Mr. Moon to describe that section of the Trail that runs through his Park. Listen to his description and you’ll be inspired to walk at least some of it. Something I look forward to once the weather cools down a bit.

By now I had well over-stayed my visit. Park Manager Moon had work to do, and people lined up outside to talk with him. But in closing I had to hear what he had to say about the Park’s Lake Tom Moore Craig. Mr. Moon is an avid fisherman. Perhaps “avid” is too tame a description. He’s forgotten more about bass fishing in the last week than I’ll ever know. So you can place confidence in his assessment of this beautiful lake. Have a listen. 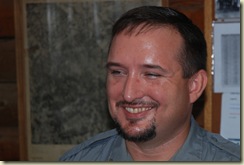 Thanks again for your generous contribution of time and expertise to the CarolinaConsidered Project, Mr. John Moon. It has been a pleasure to hear you describe the Park you think so much of. I’m sure to return in the not too distant future.

Click here to listen to the full interview without interruption.