Off tomorrow for a few days at Table Mountain State Park. This is one of South Carolina’s most popular parks. The photo featured on the Park’s website shows why. One reason, anyway. It’s located in a beautiful part of the State. Indeed, the Park even maintains a WebCam that provides a 24/7 view of Table Rock itself from the grounds. Have a look for yourself by clicking on this link.

Table Rock State Park is in the northwest part of the State, near the border with the Other Carolina, right on the edge of the Blue Ridge Mountains. Only Oconee County, and a small chunk of Anderson County, are further west. The trip, as outlined on the map above, will take about three hours and 20 minutes. It would be quicker to drive straight up superhighway I-26. But this longer route should be much more scenic. It includes stretches of Routes 9, 176, and even Scenic Highway 11, arguably the most beautiful highway in the State.

Pickens County, home of Table Rock State Park, is one of the more interesting of South Carolina’s 46 counties. Click here to access the CarolinaConsidered Pickens County Page. Like the rest of the CarolinaConsidered Project website, this county page is a work in progress. But it now includes links to a number of information sources about the County, and the County’s major towns. During this trip I hope to add more of Pickens County’s interesting and surprising places. Maybe even a restaurant or two! 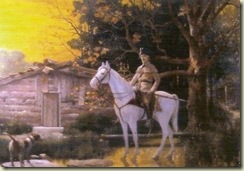 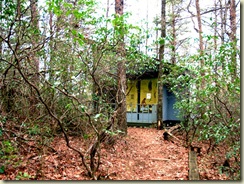 Be sure, by the way, to visit Keowee-Toxaway State Park, down Highway 11 a ways, to see their Cherokee-related exhibits. Click here for my March 2009 visit report. They have a number of interesting Cherokee artifacts. Now displayed in their new facilities, I hear.

The Revolutionary War went badly for the Cherokee. They sided with the British, and were forced not long thereafter by the winning side to cede rights to nearly all of the territory they occupied in South Carolina under the Hopewell Treaty of November 1785.

Article 13 of that treaty read, in part, “The hatchet shall be forever buried, and the peace given by the United States, and friendship re-established between the said states on the one part, and all the Cherokees on the other, shall be universal.” Hmmm.

This Treaty made the area even more attractive to land-hungry European Americans, and rapidly expanded its non-American Indian population.

Thereafter, South Carolina’s legislature created a series of districts and counties that included the area now occupied by Pickens County, until 1868 when the current boundaries were established. Most residents of Pickens County struggled to make ends meet, until recent decades during which manufacturing and tourism have supplemented the County’s earlier agricultural economic foundation.

Pickens County today is thriving. For example, have a look at “Alliance Pickens South Carolina’s” website with a click here. Select from German, Korean, Chinese, or Japanese language pages! Great to see. Add to all of this the positive cultural, social, and economic influence throughout the County of Clemson University.

And all of this development is being done with recognition of the contemporary importance of Pickens County’s rich history. There seem to be historical sites and historical markers around every bend in the road. Table Rock State Park is a great place from which to visit them. So stay tuned!