Off to Anderson, South Carolina, late this morning, as planned. First, to use the WiFi internet connection at the County library. Then to look around town for social and natural scenery in this old County Seat. The GPS estimated a trip of 20-some minutes along Route 29. Which was fine with me.

Route 29 here in Anderson County passes through some interesting country. The silos of what appears to be an enormous dairy farm soon appear on the left-hand side of the road. While a herd of very nice-looking cattle grazes in the field on the right. I couldn’t stop for a photo, unfortunately. Too much traffic, and not enough road shoulder. But they were a beautiful sight.

On toward Anderson. Small stores and gas stations occupy nearly every corner along this pleasant route. Not unusual for this part of the country. But still interesting. Wish I had time to stop and chat at a few of them.

Once in Anderson proper, I was surprised by its size. Even after driving through a couple of times in the past. And it certainly didn’t fit descriptions I’d heard during classes at USC from students born and raised in Anderson! This is a city! In, I imagine, both the positive and the negative senses of that term.

After several turns and about ten minutes of in-city travel, the trusty GPS announced with its usual confidence, “You have reached your destination.” 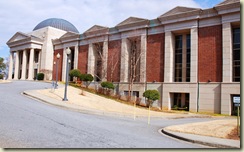 Well, Not likely. I had just driven up a hill toward a building – no, an edifice! – that brought to mind the Smithsonian Museums on the Mall in Washington, D.C. It was huge. It was pillared. And it had an impressive dome at the top. This couldn’t be the headquarters of a South Carolina County Library. 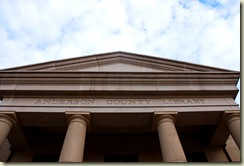 Well, it was. Hesitant to reveal any lack of confidence to the trusty GPS, I went along with its instructions, and drove close enough to read the sign. Indeed! I had arrived. 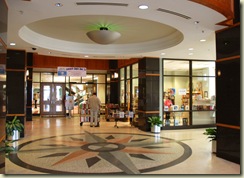 Thoughts of WiFi and limited time vanished as I approached the Building and entered the foyer. What a place! I had to know more about it before settling down to anything as mundane as an internet connection.

First, though, inside the Administrative Office a pleasant and obviously efficient receptionist introduced me to Ms. Janet S. Price, Assistant Director of the Anderson County Library System. 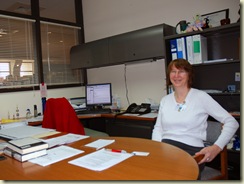 Ms. Price on the spot agreed to take time – undoubtedly from her lunch hour – to tell me more about the Library in a short CarolinaConsidered interview.

I first, of course, asked her about the building. Click the button to hear her explanation. The building looks from the outside as if it had been there forever. Not that it was run down or worn. But in the sense that it blends nicely into the community environment. 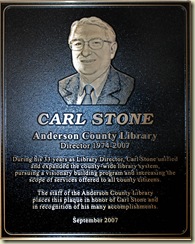 Carl Stone, longtime Anderson County Library Director, certainly knew what he was doing! You’ll get a better sense of the boldness of his vision when we visit the building that previously housed the Library, just down the street. Today it serves as the County Museum, and is a fraction of the size of the current Headquarters. Going from there to here must have required some thought! 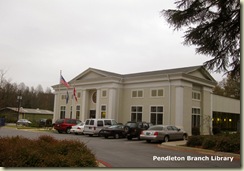 You may recall mention of the Pendleton Library during an earlier post. Well, impressive as it is, Pendleton, in fact, is a branch of the Anderson County Library System. So I asked Ms. Price about those branch libraries. All part of the overall vision.

Impressive as all of this is, it would be a mistake to conclude that the Anderson County Library System is rolling in money. It isn’t. Like all other South Carolina public institutions I’ve encountered, it’s suffering from budget cuts, and anticipating more. No government sector growth here, it seems. That’s all in Washington, D.C.!

I’m an admitted library fanatic. Always have been. From Bath, New York’s small Davenport Library in the early 1950s onward. During the past four decades, or so, I’ve watched digital media and the internet grow in importance. So, I asked Ms. Price about all that. I never thought of the library as a center for teaching basic computer skills to the general public. Listen and learn! 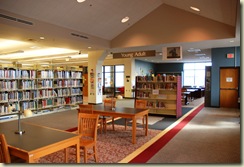 Well, we’re way over time already. There’s much more to tell about this impressive Library. Especially about their emphasis on meeting the needs of the younger patron. And many more photos to show. They’ll have to wait until the next post. So stay tuned!