Off Sunday morning again on a trip divided between South Carolina’s Anderson County and Georgia, just over the border.

As you can see on this map, Watsadler Corps of Engineers Campground is at the southernmost end of Lake Hartwell. A mile over the border into Georgia, on Route 29. Just beyond the dam. This trip I’ll be spending most of my time in Anderson, and Anderson County. The South Carolina county highlighted in red you see above. Near the northwestern corner of the State.

The drive over, of about three hours, was uneventful. Well, with the exception of an unexpected road closing. Everyone in South Carolina but me knows that I-385 North is closed for construction. The usual route toward Greenville from Columbia. It has been closed since the beginning of the year. Well, I didn’t get the news!

Live and learn. I quickly discovered how to eliminate route segments from the trusty GPS. I’d never used that feature before. Remarkably, once the I-385 segment was eliminated, the GPS led the way to the Campground without a hitch. No circling necessary! Didn’t even have to watch for the detour road signs.

So, if you’re the other GPS owner in this world who doesn’t know about the eliminate route segment feature, dig through your trusty Guide’s menus to find it. Or, heaven forbid, take a peek at the manual!

I-20, I-26, and I-85 are fine four-lane super highways. They make cross-State travel these days quicker, easier, and probably safer. But they aren’t the routes to take if you’re interested in natural and social scenery. South Carolina’s winding two-lane roads provide that. In abundance!

After every trip I firmly resolve to drive only secondary roads next tour. Then time limitations route me back onto the super highways for much of the way. That was true on this trip.

The secondary roads toward the end, though, through Anderson County, passed all sorts of interesting places. I hope to go back today for a closer look. Anderson itself, now more a city than a town, will be the primary destination. Or, that’s the plan, anyway. 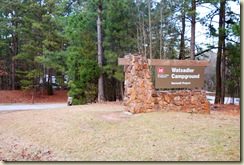 I arrived at Watsadler’s main gate around 2:30 on Sunday afternoon. The turn from Route 29 is easy to miss. So, believe the GPS when it tells you to turn right onto Watsadler Road! The main sign you see in the photo above is a mile or so down the road. Not out on Route 29.

As at nearly every Corps of Engineers campground I’ve ever visited, the hosts at the Watsadler gate were helpful and pleasant. I imposed upon their hospitality with a few questions. Again, as usual. 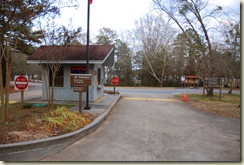 This engaging couple has been with Watsadler since 2002, and know the area well. I asked them to describe the Campground in a word or two. Their first choice was “family oriented.” Their second was “busy.” Though not at all busy at the moment.

Camping, even RV camping, it seems, isn’t the most popular activity at this time of year. But during the season when normal people camp, it’s best to make reservations well in advance. The disappointment-generating “Campground Full” sign often goes up here. 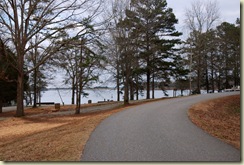 Then on to the site # 18 loop. The scenery here, as you see above, is beautiful. The Campground’s main roads are well paved and smooth. Though some of the campsite surfaces could use attention. 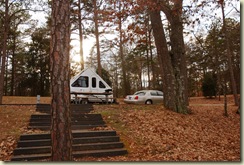 But imagine staying a few days on this site! Smoothly paved or not! Yes, I did resort to some pulling and hauling, and even to the BAL Leveler, to get the Mobile Studio level in all directions. 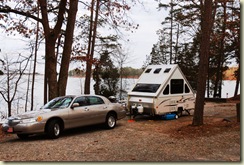 But this was the result. A spectacular view of the lake from a nicely wooded site. Can’t beat that with a stick!

If you look closely, you can see the little Weber propane grill on the picnic table. Time for a grilled hamburger. Now, what tastes better than a hamburger grilled nicely at a lakeside campsite?

More later on this beautiful Corps of Engineers campground. So stay tuned.