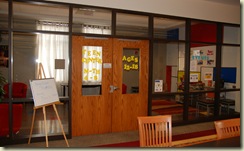 As do the Library’s facilities. At the end of the last post I mentioned the Library’s emphasis on meeting the needs of their younger patrons. Well, here’s an example of that. A meeting room devoted to the 12-18 set. You may not be able to read the sign in front, even after clicking. But it advertises an “Anime Night.” With a film.

“Anime”? You may well ask. A cartoon craze from Japan popular among young Americans that I don’t even pretend to understand. Apparently somebody in the Anderson County Library System does, though. A good thing for young folks in Anderson. 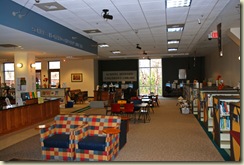 I had the good fortune to meet the Children’s Librarian while touring the Library. She has responsibility for an enormous collection. And for surprisingly extensive facilities. The photo above doesn’t do justice to this section of the Library. The space devoted to the Children’s Library extends to the left just past the circulation desk well back into the building. I couldn’t photograph that section since it was full of children and their parents. The Librarian said the facility is nearly full every day of the week after school. A good sign! Future Library patrons, as she said. 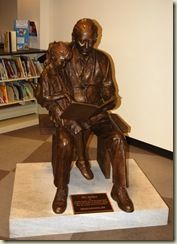 Here, at the entrance to the Children’s Library, is another example of community-donated art. 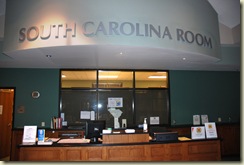 Not all of the Library’s facilities are devoted to young readers, however. Here’s a shot of the main desk of the “South Carolina Room.” This, clearly, is a research collection. State history; county history; genealogy records. All presented as conveniently as possible. Even the microfilm readers – bane of any academic researcher’s existence – look new and user-friendly. 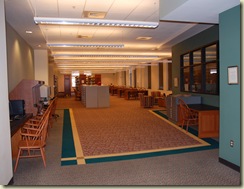 I hope before leaving to spend more time right in this room, looking through the historical records of Anderson County for CarolinaConsidered.

There’s much more to note about this remarkable institution. But we have to move on. Lots more to see in Anderson County. One final note, though. I was especially impressed with the degree to which the Library System made its facilities available to the community. Another indication of the strong Library-Community relationship here. 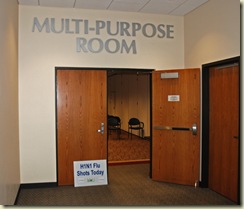 One large meeting room, for example, had been occupied by a group of enthusiastic H1N1 flu shot providers. A County-sponsored program that’s bringing this important health service more directly to the public. Other meeting rooms were occupied by community organizations providing other services. Most well attended. Many of the attendees senior citizens. 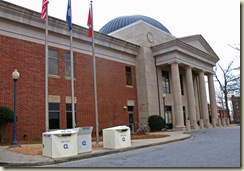 So, when your travels take you to, or near, Anderson, South Carolina, be sure to stop by to see this remarkable county library. Go in; take a look around. You’ll be impressed. I certainly was.