Huntington Beach State Park is a busy place! Not for those of us visiting. But for the staff. From the top down. Everyone seems to be doing at least two jobs at the same time. In preparation for the tide of visitors expected to descend upon the Park in a couple of weeks.

Nonetheless, all staff members I’ve encountered here have been most visitor-oriented. Never too busy to answer questions, or just to chat. 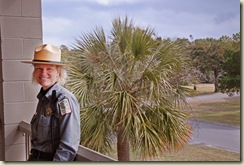 Including even the Park Manager! I telephoned ahead, of course, to make arrangements to interview Park Manager Brenda Magers today at 10:30 a.m. She kept the appointment, and we met over the conference table in the Headquarters Building.

Normally I run only out-takes from recorded interviews of this sort. But this one is interesting from beginning to end. If you’d like to listen to the interview in its entirety, go to the bottom of this post and click on the “Full Interview” link. 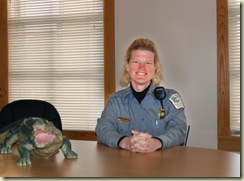 We began with a general introduction, and Ms. Magers’ arrival at this Park. About four years ago.

I then asked what, after four years, Ms. Magers likes most about this particular Park. She mentioned the beach, of course. And also the extensive salt marshes and brackish lagoon that attracts so much of the wildlife. Especially birds.

Ms. Magers’ then described her career in the South Carolina Park Service. I was surprised to learn that she’s in her twelfth year of Service. Beginning as an entry-level Ranger in Greenville. With time spent managing Rose Hill, an important Upstate historical site. Have a listen as she describes it. Lots of different challenges. Including EMS training and rescue! 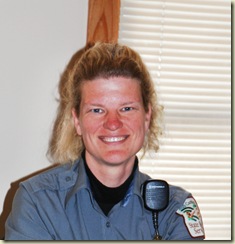 Listening to Ms. Magers describe her Park Service career, I had to ask how it was to work in a field where colleagues are overwhelmingly male. Again, her response was most informative. Be sure to listen to this part.

And this brought up the issue of recruitment. Just how does anyone – male or female – interested in this branch of public service prepare themselves to be considered in the Park Service’s highly competitive recruitment process? Here’s her response:

Time was running short, were I not to over-stay my welcome. So I asked one of those general sorts of questions that allow interviewees to say most anything they want. This time, though, I was surprised. Truth be told, most Park Rangers are not natural executives, or administrators. But Ms. Magers’ response demonstrated that she is! There’s a big difference between a real administrator and a regular Park Ranger who’s been promoted and then has to cope with the budget. Have a listen: 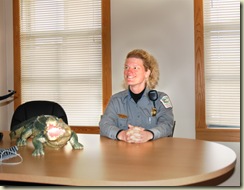 That should have been the final question. But the response to the last one was so interesting I couldn’t resist just one more general question. So I asked what is unique about Huntington Beach State Park in the State Park system. Well, Ms. Magers undoubtedly has been asked this question dozens of times before. But she still was able to make her response fresh and interesting.

With people lining up in the outer office, undoubtedly to speak with the boss, I reluctantly closed our interview with a question about visitors to the Park. Who visits Huntington Beach State Park? And Why? 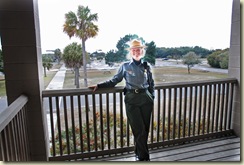 Thanks again, Ms. Magers, for your time and attention. I know you were busy as the dickens today.

As mentioned above, those of you who would like to listen to the interview without interruption, from beginning to end, click below. It runs for about 15 minutes. A pretty big file. So I’ve arranged it to open in a new window in your default MP3 player. Don’t forget to click back here when you’re done for more posts on Huntington Beach State Park.

Click here to listen uninterrupted to the whole interview.