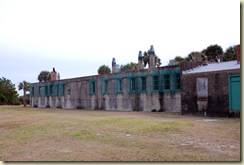 All visits to Huntington Beach State Park should include a tour of Atalaya. The oceanside summer home built for Archer Huntington and his wife, sculptor Anna Huntington.

The house occupies an enormous square of land. 200 feet on a side. Though the actual living space within is quite modest. Only a few small rooms were intended for the Huntingtons themselves, as far as I could tell. All on the eastern and southern sides of the square. With the remainder assigned to living quarters for accompanying servants and utility rooms. 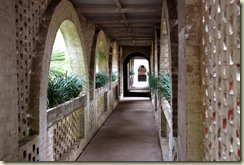 That’s because the whole structure, with the exception of a 40-foot tower in the center that served as a water reservoir, is only one story high. With no basement, of course, this close to the ocean. 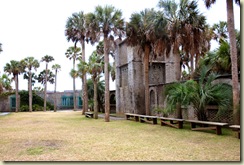 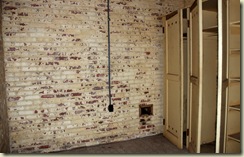 The internal walls of the house, as you can see above, are of white-washed brick. Much of it quite beautiful brick that whitewash does nothing to enhance. To be fair, the house has endured years of rough treatment since its completion in 1933. Loaned to the Army Air Corps during World War Two. And then occupied only for the 1946 and 1947 seasons by the Huntingtons. 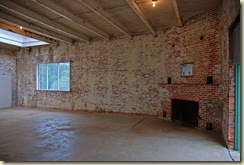 One room in the house that looked functional was Anna Huntington’s indoor studio. You see a view of it above. One can easily imagine her working here on her remarkable statues in inclement weather. 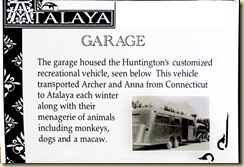 One other interesting discovery. Archer and Anna Huntington were early RV-ers. Here’s a photo of a photo of the “customized recreation vehicle” they used to travel to and from Atalaya each season. Wonder whatever happened to it. 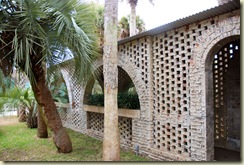 So, there you have it. A brief, uninformed look at Atalaya. One of the most popular sights here at Huntington Beach State Park. Certainly worth the $1.00 admission fee required to look around. So be sure to take a tour when you visit Huntington Island State Park.

I’m sure I’ve failed to do Atalaya justice. Bill and JoAnn from Elmira, New York, the patient host attendant couple, did their best to educate me in the time they had. They were a delight to meet and talk with!

But still, to my untutored eye Atalaya seemed more whimsical than impressive. An impulsive project born of a vague idea. That would have benefited from the advice of a sympathetic architect. But then, it may well have suited the purposes of its owners to a T.