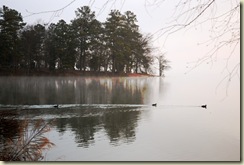 Up this morning well before daylight after sleeping like a log last night here at Watsadler COE Campground. Then, just after dawn, a noisy squadron of geese moved out for maneuvers not far from the shore. 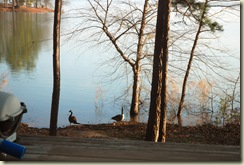 As the sun rose, well past breakfast time, two scouts appeared on the shore of the campsite. Undoubtedly expecting a hand-out.

Their indignation at my failure to follow local custom was apparent. I could almost hear their disappointed conversation as they waited in vain for the usual slice of bread, biscuit, or what-have-you. 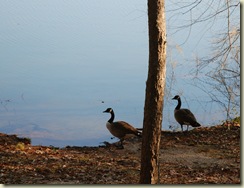 After taking the first photo through the Aliner window, I stepped outside to take a few more. Both geese turned expectantly toward the Aliner when they heard the door. Then waddled off to return to the water when they realized I was only taking pictures. “Ah, to think we abandoned annual migration for this kind of treatment!” 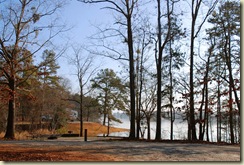 This campground is beautifully arranged. Nearly every site is right on the shore of the lake. What an opportunity for kayaking! I could easily launch from the shore of this site. And from most of the others. Though the water and atmosphere are just a little too cold for kayaking at the moment. It won’t be long, though. What a place for kayaking.

Watsadler’s bath house is of early vintage. Building and facilities. Though maintained in spic-and-span condition. It looked to me to be about time for replacement. 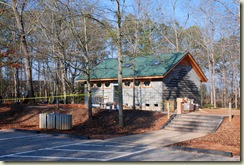 Well. Lo and behold, just up the hill a ways, that work is already under way! A crew of several men were busy on the building you see above. I spoke briefly with the site superintendent. He told me it won’t be long before the project is done and ready for use. He was from Anderson, South Carolina, by the way. 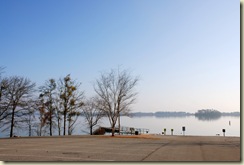 Speaking of kayaking, Watsadler maintains a nice boat ramp. The area includes a large parking lot, with those extra-long sites for vehicles pulling boat trailers. Plenty of space here, though it must get busy in the summer.

The Advanced Elements inflatable kayak, of course, doesn’t require one of those long parking sites. It has a trailer. But it’s just two wheels that attach to the stern. Great convenience for ElderKayakers! 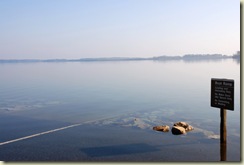 We’ve had a lot of rain during the past week or so here in South Carolina. Not complaining, now. Just mentioning it. Certainly better than the two feet plus of snow folks to the north of us have endured. Washington, D.C., must still be digging out!

But look at that boat ramp! Water well above the normal shore line. Looks as if the lake’s about to run over. Of course, it isn’t. But it is high. I’ll try to find out later just how much higher than normal it is now. 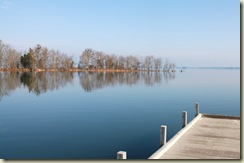 In the meantime, just enjoy the views! This is a beautiful part of Lake Hartwell. Ideal for kayaking. At least, for my style of kayaking. Which is relatively smooth water with an interesting shoreline to paddle along. 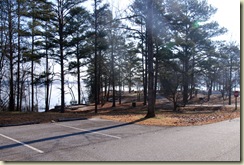 An added bonus is that a kayak could be launched easily from the shore of nearly every site!

Off now to Anderson to learn more about that part of South Carolina. So stay tuned.