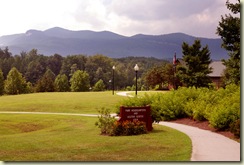 Over to the Visitor’s Center and Park Office this morning for an interview with Park Manager, Poll Knowland. Another beautiful day here at Table Rock State Park. 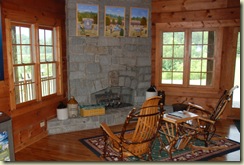 You can’t help but be impressed with this facility when you visit. Both outside and inside. We’ll have to take a closer look at this Visitor’s Center in another post. 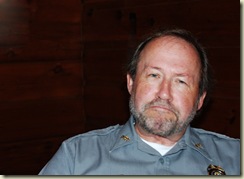 Park Manager Poll Knowland, like most of his colleagues around the State, has heavy demands on his time. Still, he kindly agreed to sit for a few minutes to talk with CarolinaConsidered. Just before dashing off to a project planning meeting in a nearby town.

As usual, we began with details of his personal background. Which turned out to be the most diverse I’ve come across.

Poll Knowland was born and raised in Ontario, Canada. He arrived in South Carolina at the age of fifteen when his Father joined the faculty of Clemson University.

After spending his later teen years here in the Upstate, then graduating from Clemson, Mr. Knowland joined the National Forest Service for a twelve-year stint before returning to South Carolina. He accumulated considerable experience with the National Forest Service. Including search and rescue skills. Skills he’s since been able to put to good use in this mountainous area. 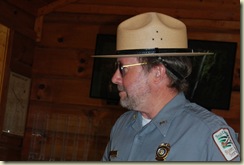 Note that with the exception of Lake Hartwell, CarolinaConsidered has visited and reported on all of Mr. Knowland’s parks. Click on each Park name above for a quick virtual visit.

Mr. Knowland’s work at Dorchester State Historical Site was especially impressive. Be sure to click on over to see the results of his effort to realign the Site’s emphasis from recreation to an archeological resource. It must have been quite a challenge. Think of the initial community reaction!

I then asked Mr. Knowland to describe Table Rock State Park in more detail. It’s significant, I think, that right after mentioning the size of the Park – 3083 acres – he explained the importance of the Park’s relationships with its surrounding areas and organizations.

“It’s very difficult nowadays to maintain and manage a park within the park boundaries. Our Park boundaries go so far outside our geographical boundaries. Especially nowadays, we have to work together.” That’s certainly true. But easier said than done! It requires a high level of interpersonal diplomatic skills. And patience. It also exponentially expands demands on the Park Manager’s time. 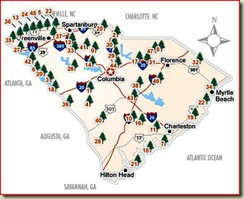 With 47 separate locations, South Carolina’s Park Service requires a complex bureaucracy to provide its services to the State. Including several managerial layers. Personnel within that bureaucracy must be prepared to move from position to position during their careers.

As in any government bureaucracy I’ve ever studies, the easiest way to survive – even thrive – is to continue in any position to do what’s been done in the past. But to do it just a little better. Don’t make waves, in other words. Above all, don’t upset or challenge established interests. That’s time-consuming and can damage one’s career opportunities. Even when things obviously need to be changed. Leave it to the next person. A well-known phenomenon. 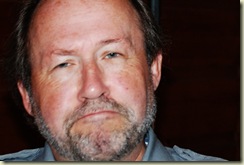 Well, I somehow I got the impression that Park Manager Poll Knowland doesn’t operate quite that way. When change is needed, he becomes an agent of change. 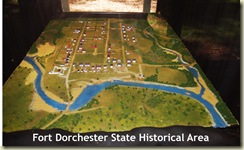 Consider Dorchester State Historic Site, for example. And imagine the reaction of influential community groups when they learned that the new Park Manager planned to turn their beloved recreation area into an archeological museum of sorts. It was absolutely the right thing to do. Needed doing, to be sure. But, oh my, the complications it must have created.

I didn’t ask Mr. Knowland about the initial reaction of the Dorchester community to his plans. Didn’t need to. Already knew! Yet, when we visit Dorchester today we all benefit from the effort he invested in significant change there. Quite unusual in my studies of government bureaucracies.

Speaking of Dorchester, I hope to get back there soon to learn more about our colonial history from the Site and to interview the incumbent Manager, Ashley Chapman. 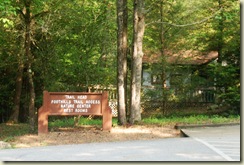 Back to Table Rock State Park, Mr. Knowland described some of the projects with which he is most pleased. Beginning with improvements in the trail system.

There are several, of varying length and difficulty. Here’s a list, with links, from the Park Website. 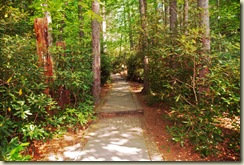 Table Rock’s trails are rated from moderate to “highly strenuous.” Now, these are real mountain trails, so be prepared. Due to the heat – well …. and maybe physical condition … – I was able to only go a short distance up the moderate Carrick Creek trail. But it was enough to assure that I’ll be back to see more once the weather cools a bit. The scenery’s incredible. 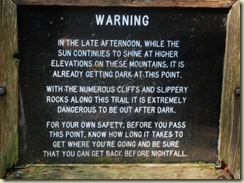 The trails are hiked regularly by Park personnel and volunteer “Ridge Runners.” They’re well maintained and clearly marked. But do heed the warning signs. Especially the one above about the early onset of daylight here. Even trails as beautiful as these are no fun when the light fails and you’ve forgotten extra batteries for your flashlight.

Mr. Knowland also mentioned renovation of the Park’s fourteen cabins. Six remain to be done as budget and resources allow. But the majority already have been returned to their original CCC configuration. 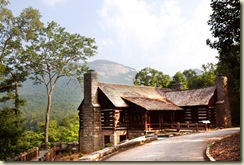 And speaking of renovations, the Lodge has to be the grandest renovation project of all. It had been used as a popular local restaurant for years. Hardly the ideal function for such a historic structure. So initial planning began in 2000. The actual renovations began in 2005, and were completed in 2008. It was a huge and expensive project. But the result must be seen to be believed. More on this historic site in a subsequent post.

Talk then shifted to projects related to other special resources found in the Park. Including on-going studies of the region’s black bear and timber rattlesnake populations. 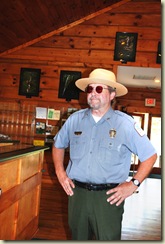 Important efforts! For example, information about feeding habits of timber rattlers has allowed the Park to avoid shifting trails into areas favored by the rattlers for hunting.

Mr. Knowland then described some of the Park’s trails. I asked him about trails suitable for ElderHikers, like me. He cautioned that the beautiful Table Rock Trail includes about 2,000 steps. Lots of up and down. But the Pinnacle Mountain Trail, somewhat longer, has only a seven percent grade. It therefore is easier to navigate. 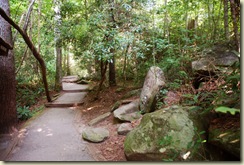 Best of all for ElderHikers, though, is the Carrick Creek Trail. It’s just under two miles in length. The initial portion is even paved! And it passes through stunning scenery. 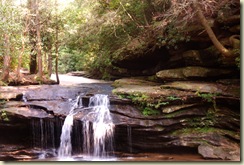 Including this charming waterfall, with a viewing platform and benches, just completed earlier this year. 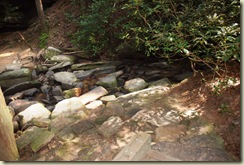 Now, there’s something else about this area of Table Rock State Park that requires mention. Look at the photo above. It’s a path leading down into the creek from the viewing platform. A path encouraging visitors to walk down, to get their feet wet in the creek. And even to wade over to the waterfall above. 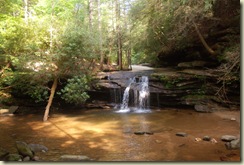 In fact, as I walked back down the Carrick Creek Trail, a group of ten or so young teenagers were doing just that. They were standing right under that ice-cold waterfall, whooping, and having a great time. What a sight. Wish I could have taken a photo. But that’s not allowed. You can imagine what fun they were having.

This, Park Manager Knowland explained, was inspired in part by the U.S. Play Coalition. Described on their website as “A partnership to promote the value of play throughout life.” Former National Park Service Director, Fran Mainella, now at Clemson University, is a leading light of this program. Give children the opportunity to get wet and dirty outside. Get them off the couch and out in nature. Sounds like a good plan to me!

Thanks again, Poll Knowland, for your contribution to the CarolinaConsidered Project. And for a great RV camping/hiking experience at Table Rock State Park.

Click here to listen to the interview with Park Manager Poll Knowland without interruption.