Another beautiful day here at Table Rock State Park. Even if it is too hot and humid to walk the trails. Though the early mornings are fine. A good excuse to return later in the year when temperatures cool. 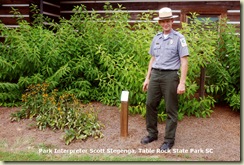 Park Interpreter Scott Stegenga has agreed to meet this afternoon for a short interview. Mr. Stegenga too maintains a very busy schedule at the Park, so it will have to be brief. Good to have another contribution to CarolinaConsidered’s new Interpretive Ranger section.

We began the interview around 2:00 p.m. at the impressive Park Office and Visitors Center. Mr. Stegenga, like me, is an adopted South Carolinian. He’s from southern Minnesota, where he grew up on a large family vegetable farm. So, no question of outdoor activity as a youth. Family farms tend to keep young people outside and busy five seasons out of four during the year. 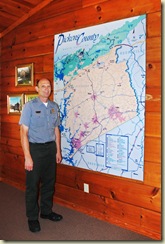 Scott left the farm in his late teens to earn a B.A. in biology at Iowa’s Northwestern College. One of those excellent Midwestern institutions that still offer real liberal arts educations. Then spent a few years working seasonally at a California outdoor education camp for children. What a background for the role he plays today at Table Rock.

Speaking of which, Mr. Stegenga entered the South Carolina Park Service in 1989. Assigned right here at Table Rock State Park. And has been here ever since. This alone should tell you something about this beautiful park and the surrounding area. Hard for a person to leave once they become accustomed to these surroundings. 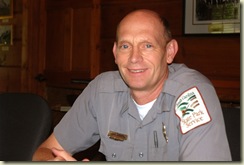 Discussion then turned to changes Mr. Stegenga has seen – sometimes created – at this State Park over the past two decades. He mentioned renovation of facilities, and the effect of electronic communications, including the web-based reservation system. He then mentioned the Park’s trail system. Mr. Stegenga helps to maintain those miles and miles of trails. He even hikes to the top of Table Rock or Pinnacle once or twice a month. Inspecting trails, leading groups, and performing maintenance. Can you imagine! A nice hike. But carrying a chain saw? Oh my. 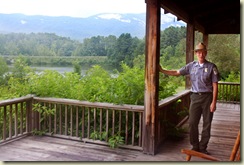 I mentioned the South Carolina Park Service’s Interpretive program at the beginning of this post. Scott is one of only 20-some interpretive rangers in the whole State system. At the beginning of the interview he described his role simply: to “ … provide information and interpretation of our resources to our visitors.” Which at Table Rock State Park focuses on the region’s geology and its cold water streams. He elaborates a bit more here. And explains Table Rock’s participation in the Discover Carolina program with fifth and eighth graders. 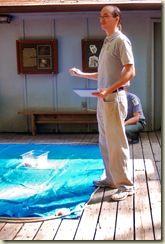 While visiting the Park’s Nature Center later in the visit, I happened on a “Toad Race” sponsored by the Center. Scheduled for 10:00 a.m. Here you see Mr. Stegenga crouched down in the background, with a Nature Center colleague preparing young toad-handler contestants for the race.

Truth be told, I didn’t think much of a “toad race” before observing the event. Seemed a little silly to me, in fact. But the children participating – and their parents! – loved it. They had a great time, cheering the toads on toward the perimeter rope. This illustrates how important it is for the Park’s interpretive rangers to be able to relate to all ages of Park Visitor.

Before, during, and after the race, Scott and his colleague were able to provide the whole group with plenty of information about toads and their role in Table Rock’s eco-system. Some of it quite technical. Information they otherwise wouldn’t have bothered to accept. 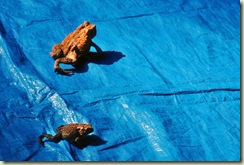 Toad racing is only one of the many ways that Scott and his interpretive ranger colleagues attract and maintain the interest of younger Park visitors in the natural environment. It’s a complex challenge. The diversity of the student body alone flabbergasts me. I couldn’t imagine facing that teaching challenge. More on the Park’s Nature Center in a later post. It’s an interesting place. 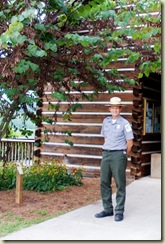 I asked Scott to be more specific about the people who’ve participated in his interpretive programs over the past two decades. What they’re most interested in. Whether, on average, they’ve become better informed about their natural environment over the years.

And how economic conditions have affected Park attendance. He said that last year over 17,000 people passed through the Nature Center. With varying degrees of involvement, of course. Click to listen to his response. It’s interesting. 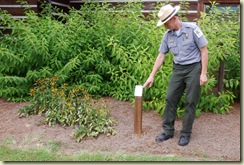 you’re sure to notice the small descriptive plaques posted in front of the trees and most of the plants. I asked Mr. Stegenga about them. Here’s what he had to say. Be sure to take time to read the information on these signs.

A Park Interpreter is well positioned to describe what Park visitors find most interesting. I asked Mr. Stegenga what he thought about that. No surprises. But his response describes well what you can expect to see at Table Rock State Park.

Waterfalls, mountain trails, the effects of seasonal change. I’d second all of that. It’s possible at Table Rock to walk less than 100 yards from your comfortable RV and be right in the woods. A nice feeling. 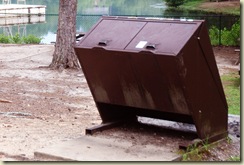 So I asked him about that. There have been more than fifty sightings so far this year. But the bears have been no problem at all. An important reason for this lack of bear problems is the distribution of bear-proof trash cans throughout the Park. And, careful management of all garbage. Here’s what the bear boxes look like. They’re solid steel containers with heavy lids that snap tightly closed. Bears would find it difficult to slip a paw up under the cover to find the opener. 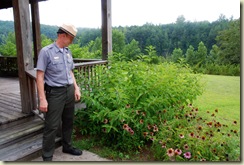 Finally, I asked Mr. Stegenga about the numerous volunteers I met during travels around the Park.

He confirmed their importance in the Park’s overall operation. Including the Nature Center and trail maintenance. He also mentioned the importance of the Park’s Camp Hosts, a subject we’ve discussed during earlier programs.

Thanks again, Scott, for your time today. And for your comments. I hope to see you again during my next visit to Table Rock State Park.