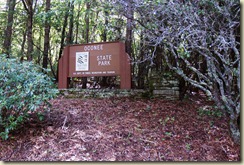 Another beautiful day here at Oconee State Park in the westernmost county of South Carolina. We’re over here in the mountains. With that clear air, pure water, and genuine mountain vegetation throughout the Park. It’s almost like OverHome! 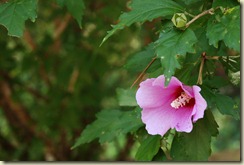 This morning Park Manager Jo Anna White agreed to an interview. So, around 9:30, over I drove to the Park Office. Good thing I left a little early. It’s impossible to walk or drive very far in this Park without seeing something that demands further investigation. Or just plain enjoyment. 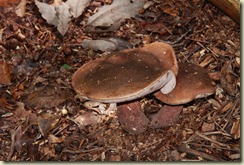 This morning it was a combination of flowers and mushrooms. One beautiful; the other interesting. I can’t recall seeing so many different kinds of mushrooms in one area. White, brown, flat, round, small, and very large. Some showing evidence of animals nibbling away. So, the trip to the office took a good bit longer than expected. Well, I’m not the only one interested in mushrooms. Just came across this website: “Mushroom Mountain.” Click and have a look. 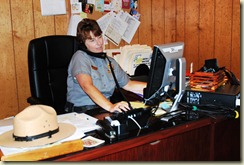 Finally, just before 10, the appointed hour, I arrived huffing and puffing, carrying all sorts of recording and photo equipment. Must have been quite a sight! Mrs. White keeps a busy schedule. She was on both the phone and the computer, solving problems for the Park, when I arrived. 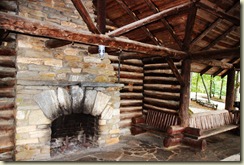 I thought we’d do the interview in her office. A quiet environment, with no wind. But she insisted that we sit out at one of the nearby CCC-built picnic shelters. And she was right. It was the ideal environment for an interview about the Park. Just look at that stone and wood work. All created by the CCC crews from materials found nearby. Wormy chestnut and “rebel stone” quarried near Stump House Tunnel, just down the road. All beautifully preserved by generations of Park personnel. What a place to sit and chat about Oconee State Park! 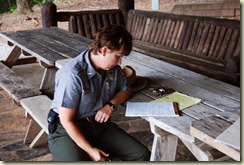 As usual we began with some personal details. Mrs. White, it turns out, was born and raised in Grover, North Carolina. Just across the South Carolina line. Like so many of her colleagues, she was an outdoors person from the beginning.

As a kid, spending as much time in nature as she could. As you listen, note her reference the importance of nearby Kings Mountain State Park in South Carolina. And the adjoining national battlefield. [Click here for a link to the CarolinaConsidered articles on those Parks.] She did her undergraduate work at Wingate University in Monroe, North Carolina. Also near the South Carolina Border. 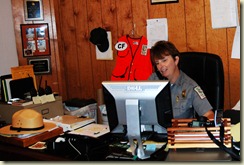 We then moved on to Mrs White’s career with the South Carolina Park Service. Listen carefully as she describes how she finally landed a ranger position, and what she had to go through to achieve that objective. Hearing there were “ … no full-time positions available … “ didn’t discourage her. She accepted part-time status, learning a variety of jobs. Until a full-time position became available.

Also note the importance of flexibility, the ability to adapt. Large parks; small parks. Inside jobs; outside jobs. Manicured parks; hurricane-devastated parks. Imagine reporting to work at Huntington Beach State Park just after Hurricane Hugo!  [Click here for a series of CarolinaConsidered programs on that beautiful Park.] Park rangering is no job for one-trick ponies, so to speak. 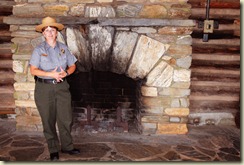 It’s not often we get to interview a park manager who’s spent over a decade at her present park. Mrs. White has, however. First, over a decade as assistant superintendent, or assistant manager. Then, after a stint at Lake Hartwell, back here as manager. So we also get a sense of the difference in perspective between top and mid-level management.

She said that successful managers must concern themselves with past, present, and future. Not just this year and maybe the next. To leave a mark. To make a difference. And her description of Oconee State Park emphasizes the importance of tradition. From the CCC crews who carved the park out of the soil and rock, to the memories of long-time park visitors. Even to sponsorship of regular square dances. A tradition at Oconee since 1944. Listen to Mrs. White describe all of this. Very interesting. 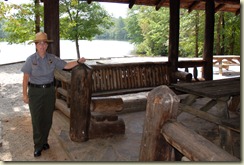 Looking back, it seems I’ve described every one of South Carolina’s State Parks as unique. But it’s true! The scenery here at Oconee is like nothing I’ve seen before. So I asked Park Manager White to expand on the physical description of the park.

The “critters,” as she calls them, that we can expect to see. And the seasonal changes. The Park is open for camping year-round. With snow sometimes in the winter. But not much. Good thing, given the road up that hill! Come in the spring see the rhododendron, mountain laurel. And even Oconee Bell! A very rare plant. You’re unlikely to see a bear or a snake. But you may! Have a listen to Park Manager White’s description with a click on the button. 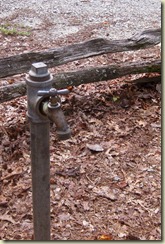 I then asked Mrs. White about the water at this Park. I normally filter all water used in the Aliner for tea, drinking, or cooking. Not necessary here! Why?

She wasn’t surprised by the question. She confirmed that it comes from deep wells drilled here during the 1940s. And that it’s highly thought of throughout Oconee County. Be sure to have a taste when you visit. With water this pure, it’s a wonder there isn’t a distillery nearby ….

Oconee State Park is rightfully proud of their 20 cabins. As you can see in these photos, the CCC-built cabins have been well maintained. 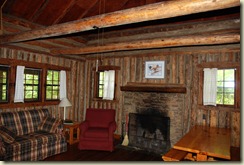 Not only maintained, though. Considerable effort over the years has been invested to keep them looking as much as possible as they did when they were built.

The facilities have been updated, of course, with all imaginable modern conveniences. But the look remains – well … beautifully rustic. 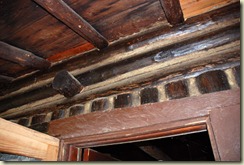 Each cabin is unique. Both in configuration and in construction. Though all of the walls I saw were chinked logs of wormy chestnut, cut nearby by the CCC crews.

Now, only one of the 20 cabins is painted inside. There’s an interesting story behind that. To hear it you’ll have to ask when you visit …. 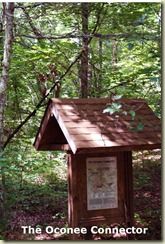 Of course, every State Park is proud of its trails. This trip again I wasn’t able to spend much time hiking them. But as Mrs. White explains, here at Oconee there’s a trail for nearly every level of physical condition and expertise. In other words, we ElderHikers haven’t been forgotten here at Oconee!

Oconee State Park is one of the few South Carolina State Parks that continues to provide its visitors with swimming opportunities during warmer months. With life guards and even a diving board. 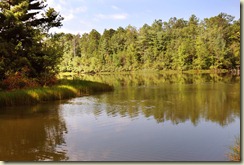 In fact, there are two lakes in this Park. Neither of them has been officially named. They’re just known as the swimming or cabin lake and the smaller fishing lake. Hmmm. I wonder if the Park System would be willing to name them in honor of a generous donor? Worth considering! 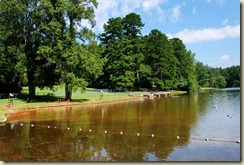 The larger “swimming lake” was dug by the CCC around 1935. With only limited tools. In addition to swimming, it contains some very large catfish. As well as brim and bass.

The smaller fishing lake came along later, and is chuck full of brim and bass. In addition, during the cooler winter months, the Park stocks the lakes with trout. An angler’s paradise! 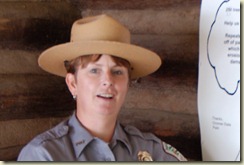 Thanks again to Oconee State Park Manager Jo Anna White for her time today. And for all of the information about this beautiful Park. Say hello to her when you next visit.