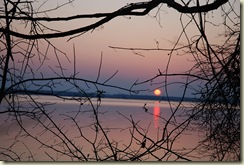 Another beautiful morning here at Santee State Park. The sunrise is only part of it. Somehow, I’ve got to learn how to record the sound of the birds. I don’t know much about birds yet. Something else to learn!

But even to the untutored ear, bird sounds are quite different from Park to Park. And even at different spots in the same Park. Here on site # 87 of Santee’s Lakeshore Campground they have a great time early in the morning.

A brave soul or two starts things off with a few notes about an hour before daybreak. Five or so minutes later, several more early risers add their contributions. By the time the sun peeks over the horizon, the concert is well into the first movement. Great to hear!

Enough about the birds. Today I’m getting ready for a 10:00 a.m. interview with Mr. Nathan Maiwald, Park Manager here at Santee State Park. I talked briefly with Mr. Maiwald on Monday. This is certain to be a good interview. 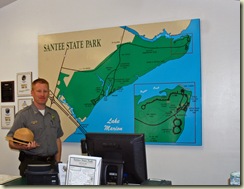 We met in Mr. Maiwald’s office at the Visitors Center. It has the look of a working office. Functional and compact. A good sign, in my experience. I tried to photograph some of the awards and certificates on the walls. But Mr. Maiwald asked that I refrain. Suffice it to say, the Park Service and others have recognized his efforts over the years. Though, respecting his wishes, I won’t be more specific than that.

As usual, I asked Mr. Maiwald to describe his career. His education. How he decided on a Park Service career. And how he arrived in his current position. Click to hear his response.

Coastal Carolina should be pleased with this! I’ve met several graduates of the Coastal Carolina program who are doing very well in the State’s Park Service. It’s essential we maintain a steady stream of these potential managers. The quality – even survival! – of our Parks depends on it. 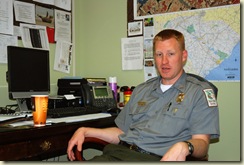 I then asked Mr. Maiwald to explain the Park Service’s personnel system. Just how are Park Managers selected? How are Park Rangers classified? And all of that. Here he gives a clear explanation.

Some South Carolina parks are known for a single feature. A particularly beautiful piece of natural scenery. Or an unusual species of wildlife. Or whatever.

Even in the short time since arrival on Sunday, I’ve been able to identify several special features here. So I was interested to hear how Park Manager Maiwald would respond when I asked him what was unique about Santee. Click for his response. Sorry for the cell phone ringing in the background. That was mine! Forgot to shut it off while recording! Live and learn. 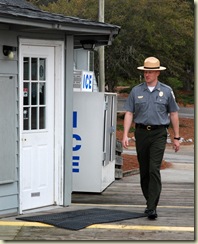 Next I asked Mr. Maiwald to identify his greatest managerial challenge here at Santee. Again, his response proved interesting. On the one hand the Park must maximize the number of people who visit the Park. Their fees provide essential revenue.

But on the other hand, this important 2,500-acre natural resource must be preserved and maintained. A challenge indeed. And one faced in a constantly changing natural and social environment.

Who would have dreamed ten years ago that State Park visitors would expect WiFi access while they are camping? Just one example. Parks that don’t recognize and adapt to changes in their natural and social environments are bound to suffer the consequences. 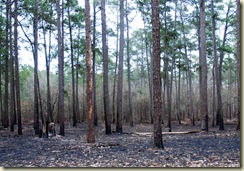 Driving toward the Lakeshore Campground on Sunday, I was surprised to see wide areas of burned forest like this on both sides of the road. Something I haven’t seen in other Parks. So I asked Mr. Maiwald about this. 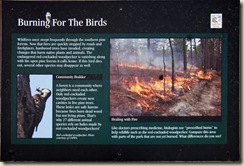 The photo above is of an outdoor sign near a burn area that explains one reason for “prescribed burns” in forests. Mr. Maiwald gives us a more comprehensive explanation. Click again to listen. 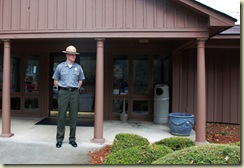 I next asked Mr. Maiwald to describe the visitors to Santee State Park. He noted strong participation from the local community. And also those people who find the Park while traveling I-95 to some more distant destination, north or south.

I’d met several groups of those “Off I-95” campers while wandering around the campground. It’s hard to imagine a more diverse group! Some hoping to learn more about the real South Carolina. Others eager to confirm the negative preconceptions of the State they brought with them. Click to hear Mr. Maiwald’s response. 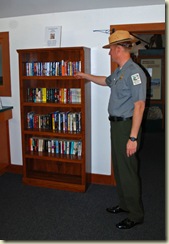 At the end of our conversation, I asked Mr. Maiwald about his plans for the future. Always a hard question to answer. A prudent manager will never go out on a limb with descriptions of grandiose plans that may never be realized. Yet denying any plans for change is equally inappropriate.

Listen here as Mr. Maiwald describes some of the innovations that already have been made here at Santee. In the photo above he points to the relatively recent addition of a small lending library. Excellent titles, by the way. Including one Louis L’Amour! He also mentioned board games available for visitors to borrow.

These are inexpensive innovations that may well improve the experiences of many visitors who otherwise would leave with bad tastes in their mouths, so to speak. Programs I like to describe as “High Bang; Low Buck” innovations. Essential in this time of budget crisis. Glad to hear it!

Thanks again, Mr. Nathan Maiwald, for your generous contribution of time this morning. You’ve helped our Carolina Considered readers and listeners to better recognize the value and beauty of this remarkable South Carolina Park.

Stay tuned to this station, as they used to say, for at least one more post on the opportunities available at this Park.

Oh, and if you’d like to listen to the interview with Mr. Maiwald from beginning to end, click here.