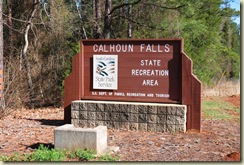 Well, in spite of the omission of Calhoun Falls State Park from the new Garmin’s database, I arrived at the Park gate in only three hours. Right on time. Though it was a bit early to check in. Not a single missed turn.

When you visit, just ignore your GPS once near the little town of Calhoun Falls, and follow Route 81. Cross that impressive four-lane Route 72, pass a couple of schools on the right, and in a mile or so you’ll see the sign above. You can’t miss it. 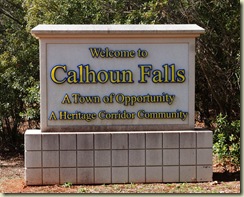 Calhoun Falls appears to be one of those small South Carolina historic communities that in recent years has fallen on hard times. Probably due to loss of employment opportunities with a plant closing. I’ll have to learn more about it during a subsequent visit.

Driving down Calhoun Falls State Park Road [which, by the way, is in the new GPS database. Not the Park itself, but the road!] I spotted the sight in the photo above. On the left, just a half-mile from the Park entrance. “The Sanctuary,” the sign says. Looks as if developers a few years back had ambitious plans that have either been put on hold, or abandoned. I’ll have to ask about it. 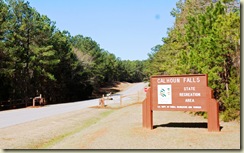 Here’s the entrance to the “State Natural Area,” as it’s officially called. Be sure to stop and pay the $2.00 entrance fee. Heck! Pay a little more, if you’re able. It’s one contribution you can be sure will be used for a good cause.

Of course, if you have camping reservations, or one of the annual passes like I have, you don’t even have to contribute $2.00! Also, don’t forget the State Parks $1.00 check-off on your South Carolina state income tax return. They need the money, and that’s a painless way to contribute to a good cause.

Enough preaching! On into the Park. This isn’t a large Park, comparatively speaking. In terms of its size on the map. Only a few hundred acres. But as you’ll see, those acres all have been put to good use. Somehow without a sense of being crowded. It also is a relatively new Park within the State system. Which gives it several advantages. Newer basic facilities; more recent designs for those facilities.

Oh, and before I forget, wheelchair access here appears to me to be easier than in most State Parks. That may be because the Park was laid out more recently, when folks had begun to take such issues seriously. My mother, wheelchair-bound herself, would have been pleased to see it.

Wheelchair ramps here abound. All of them that I’ve seen were quite level. A “Wheelchair Accessible” sign here doesn’t simply mean the facility is next to the bath house. It means efforts have been made to level and smooth the path, and to avoid steep grades wherever possible. Many of the RV campsites, for example, really are wheelchair accessible. As are many of the picnic shelters. A good thing. 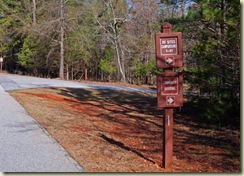 Driving into the Park this afternoon I didn’t pass the Office. So I went directly to Site # 66. There are two RV campsite loops here. # 1, as you might expect, was the first built. And # 2 was added soon thereafter to accommodate greater-than-expected demand. More on the Community Building noted on the sign above in a moment, which, if memory serves, was the original location of the Park Office. 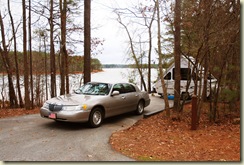 On I drove to Campground # 2. A bit further down this finger of land jutting out into Camp Russell. An ideal location for an RV campground. And there it was. # 66. Can you imagine a more suitable site? The surface is paved and smooth, front to back. The picnic table, fire pit, and lantern hanger all have been placed on a terrace below the main part of the site, which saves space above. The drive into the site slopes downward considerably. But the area intended for the RV is perfectly flat. 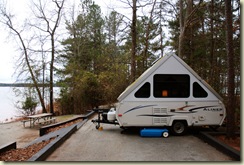 I backed in like a seasoned pro. Well … maybe more like an unseasoned pro. But with only three tries this time. [Compare that to eight tries at the last back-in site at Huntington Beach State Park!]. Unhooked the Aliner and turned it 90 degrees so it faced the water, as you see in the photo above. No problem at all given the paved site surface. 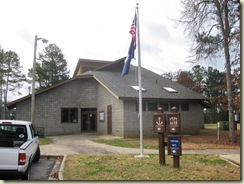 After a quick setup, I went in search of the Park Office. There, a Ranger and a part-time assistant were most helpful. They both were familiar with the area and had all sorts of suggestions for must-see places.

The one disappointment was the lack of WiFi access. And news that the closest public WiFi access is in the County Seat at Abbeville. Oh my. It would be nice if the more remote Parks in the System were given priority for WiFi installations. But that will take time and budget, I guess.

After checking in, I drove slowly around both campground loops. Each one has its own host. Both hosts have lived in the area all of their lives, and have been hosting here for a number of years. They know their business, and maintain everything in spic ‘n span order. There’s a lot more to camp hosting than blowing leaves off campsites! 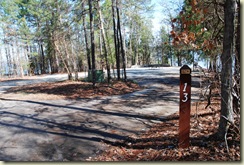 The RV campsites in this Park deserve special attention. They are, I think, the best I’ve ever seen. In fact, after seeing so many wide, smoothly paved, sites with lake views, I decided to look for a bad one. Well, no luck. I looked at every RV campsite in Loop 1 and Loop 2. All were attractive. Every one! Apart from the double sites, purposely built side-by-side, nearly all are well insulated from neighboring sites. That is, the designers of these campgrounds resisted jamming twenty or thirty more sites into the same area to increase revenue. Quite a few sites too are pull-throughs. Like # 13 in Loop # 1 you see above. 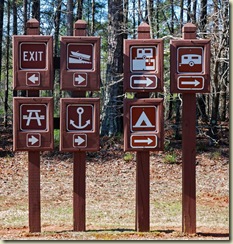 That’s all for not. More in the next post on the wide range of facilities available at this State Natural Area. I think you’ll be surprised by what you’ll see. So stay tuned.