Up fairly early this morning. Well …. “early” is a relative term. When the Mobile Studio Aliner is parked in such a beautiful spot, it just means awake in time to hear the birds perform their dawn serenade. 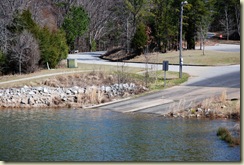 The occasion today was anticipation of a paddle on Lake Russell. Putting in and taking out at the Park’s boat ramp. The weather has improved considerably. Or, more accurately, the weather forecast. Sunny, mid-70s temperatures, with only a little wind. Ideal conditions under which to become better acquainted with Lake Russell. And, how better to do that than from a kayak!

The Advanced Elements Expedition inflatable/foldable kayak has been tucked away in the back seat of the car for more than a week. Together with all imaginable water safety equipment. All ready to go. So, around 10:30 a.m., I changed into kayaking gear and drove over to the ramp you see in the photo above.

At mid-week, this ramp wasn’t especially busy. So I parked in the shade of a tree, spread out the long blue tarp, and assembled/inflated the Expedition. Today it didn’t take long at all, since there were no bystanders asking questions. A rare event.

I waited for two large power boats to put in, and for one power boat to take out before trundling the fully loaded Expedition down to the ramp on its little cart. As you can see in the photo above, this is a double ramp. While I was removing and stowing the cart and its wheels, and preparing to push off, an Abbeville couple pulled into the other ramp with a huge pontoon fishing boat. We chatted a while about their experience on the Lake, and about inflatable/foldable kayaks. Until we saw a large bass boat waiting to come in just beyond the fishing pier. 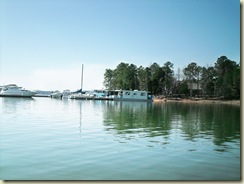 Then on with the PFD, into the kayak, and off I paddled. Out and around the Park’s Marina. All was quiet there, so they must have repaired the faulty water main. Notice how smooth the water was this morning.

That’s an advantage of this boat ramp. It’s located in the cove formed by the two finger-like peninsulas that project from the Park. That location must give welcome protection from the wind while putting in and taking out on more blustery days. 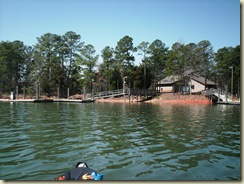 Up the lake past the Park Office and boat gas dock, the weather and water were just perfect for a comfortable paddle. This sort of calm water paddling isn’t every kayaker’s idea of nirvana. “No excitement!” some say. A reasonable point. But I guess I’ve had enough excitement to last a lifetime, and prefer more peaceful, relaxing activities. Maybe that’s part of “ElderKayaking.”

When learning to kayak a few years ago I took pains to buy a PFD, or life jacket, that accommodated an iPod. Thinking it would be nice to listen to recorded books while out on the water. Well, the first time out, on the lake at Sesquicentennial State Park, I took the iPod. But once on the water, I never bothered to turn it on. And that was the last time I even bothered to take it along. 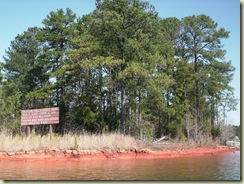 There’s just too much to see and enjoy while paddling along in a kayak. Especially close to shore. Here’s an example. Looking south along the eastern shore of Lake Russell. Not far from the Park Office, as described on the sign. Note the bank of red soil at water’s edge. And the vegetation that red soil supports. It varies considerably depending on the location in the lake. 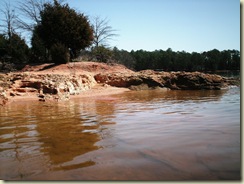 Not far away, the shore becomes rocky, with all sorts of things to see both under the clear water, and on the exposed beach. Fish, turtles, birds, snakes. No alligators here, of course. I took this photo along the northern side of a small rocky outcropping not far from shore. These small islands must have been the very tops of hills in the area flooded for the lake. 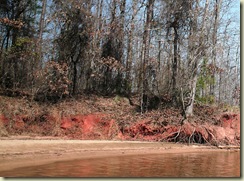 And here, just below one of the campsites on Loop # 2, you can see a natural sandy beach area that looks ideal for landing and launching a kayak. Very different shorelines within less than a half-mile along the lake. Very different plant and animal life along the way. Speaking of campsites, here’s a photo from the water of the Aliner parked on site # 66. The shoreline there is a combination of sand, red earth, and rocks.

You also have a good view of some of the Expedition kayak’s safety equipment: a spare paddle; a bilge pump; and a yellow paddle float. Some experienced kayakers chuckle over my abundance of safety equipment, given the placid nature of my paddling. But I feel more comfortable, and more responsible as an ElderKayaker, with them aboard. 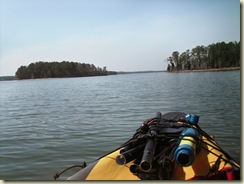 Paddling in a northerly direction up the lake, I came upon the somewhat larger island pictured here. On closer examination it looked ideal for overnight camping. Though such camping may not be allowed on this lake. Or maybe it is. No evidence of past camps visible from the water, anyway. 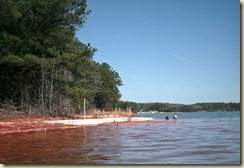 I paddled all the way around the island, looking carefully at the various shoreline formations. On one side it had a beautiful sandy beach. Quite wide for such a small island. And on the other side, a couple of less sociable geese. Perhaps on their honeymoon! Just beyond the geese is where I saw the large fire ant mound mentioned earlier. Quite an environment.

The temptation when paddling along under such peaceful and interesting conditions is to go on and on. The Expedition at thirteen feet in length and thirty-five inches at the beam is a substantial boat. But it moves along with surprisingly little effort once in the water. The side-to-side, whoosh-whoosh of the double paddle borders on the hypnotic. The backbone – that sturdy bow-to-stern rubber-covered aluminum pole I’ve written about before -- gives the whole boat greater rigidity and its keel more of a V configuration. All making for an easier paddle. 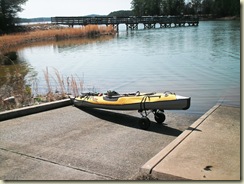 But the prudent paddler knows when it’s time to turn around and paddle back to the boat ramp. Especially the prudent paddler who’s hungrier than a bear, and knows lunch awaits on shore. Here’s the Expedition once again on the ramp, its little cart attached, ready to return to the back seat of the car. Again, with nobody around to ask questions about the boat, deflation and disassembly went quickly. 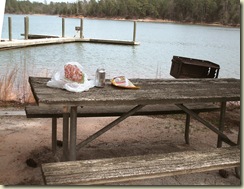 In less than half an hour I was seated at one of the picnic tables just behind the Park office having a tasty and healthy lunch. Well …. at least, tasty ….. Still able to enjoy the view across the lake. This is a wonderful spot for kayaking as well as RV camping. I’ll definitely try to return in the near future.