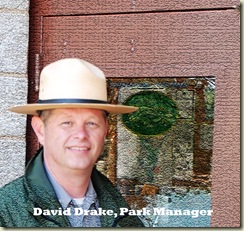 After spending much of the morning wandering around, taking photos, and just enjoying the Park [see the last post], Park Manager David Drake and I sat down in the early afternoon for a recorded interview. Interviews are not Mr. Drake’s favorite activity. And, he was busy as the dickens at the appointed time. But he’d agreed yesterday to do the interview, and kept the engagement.

That in spite of one of those mini-crises erupting that keep a South Carolina Park Manager’s life interesting. A water main serving the whole marina had just ruptured. With all imaginable consequences. Mr. Drake and the Park maintenance crew were struggling to fix it as I arrived. I offered to postpone the interview. But Mr. Drake declined, saying everything was under control. Oh my. Glad I’m retired! 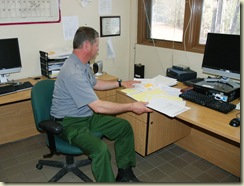 Mr. Drake’s office is small and functional. Even by Park Service standards. But as he mentioned during our conversation, the view from the window above his computer screen is spectacular! Right out onto the lake and marina.

We began with the usual personal introduction. Mr. Drake is a South Carolinian, born and bred. Raised not far from this very Park. In the historic town of Honea Path. A place I hope to visit and write about in the near future.

We then discussed Mr. Drake’s 22-year career in the Park Service. Years that included over a decade as Park Manager at Greenwood State Park. And the importance of mentoring new Rangers. 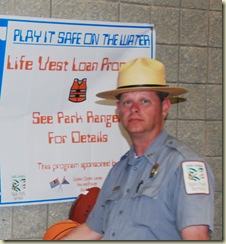 What is it that makes a successful South Carolina Park Ranger and Manager? I’ve often wondered, and asked Mr. Drake what he thought. He described it as a lifestyle. Not just a job, in other words. He also mentioned the importance of an outdoors background, and his training at Clemson University. I still don’t think we have the whole answer. But this certainly is some of it.

We then turned to the facilities at Calhoun Falls State Natural Area. I tried to describe some of them in the last post. But Mr. Drake’s description was more compelling. Listen to his description of all of the activities available here. Even the most life-jaded early teenager, or late-teenager, is certain to have fun here. While learning to enjoy the out-of-doors. 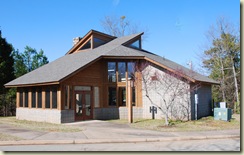 The Community Center he mentions is a huge facility. This is a photo of the front from the parking lot. Note the stone chimney peeking above the roof. It extends down to a huge stone fireplace in the main central room. I couldn’t get inside for a photo. Just saw it from the window. It’s a beautiful piece of work. 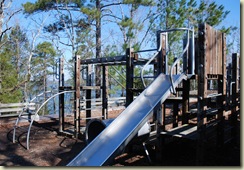 Step out the back of the community center onto a nice deck. Then down a few steps to one of those state-of-the-art playgrounds. This one overlooking the lake. A beautiful spot. A great place for a large family reunion, church outing, or company picnic. This community center must stay busy year-round. If the less expensive picnic shelters don’t fit your needs, this facility should.

Come to find out, the Calhoun Falls State Recreation Area team also has responsibility for a number of other public facilities in the area. Two of which Mr. Drake describes as “mini state parks.” The six thousand acre McCalla State Natural Area, the Caldwell-Hutchison Farm House, and eleven boat ramps on Lake Russell. Whew! This gets complicated.

I had an opportunity to meet Mr. Ellis, the Camp Host for Campground # 2 when checking in. Camp hosts, as we’ve discussed before, make all the difference when camping. And Mr. Ellis proved to be an ideal example. Born and raised not far from the Park, he knows all about the surrounding area. And is willing to share that information with inquisitive campers. Campground # 1 is similarly blessed with an experienced and active Host, Mr. Uldrick. I hope to meet him before leaving on Friday morning. 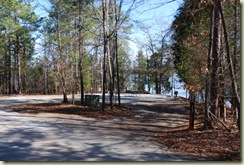 Since arriving at Calhoun Falls State Recreation Area, I’ve been raving about the RV campsites. That’s all one campsite you see in the photo above! It’s a pull-through. It’s paved. It’s level. It’s roomy. And imagine that lake view! This may be the best site in the Park. But the others are almost as nice.

I then asked Mr. Drake about visitors to the Calhoun Falls State Natural Area. He said that many of the visitors and RV campers are from the local area. That is, from Abbeville, Anderson, and other nearby towns. He also confirmed that Calhoun Falls offers senior citizens from other states the South Carolina resident senior discount. That’s 35 percent!

In response to my question about plans for the future, Mr. Drake described improvements to the campground showers, and gave a detailed description of the new fish cleaning station. Both projects interested me. First the campground showers. It’s a relatively minor thing. But it shows that Calhoun Falls is aware of the importance of the shower facilities for RV campers, and that they are keeping track of that detail. 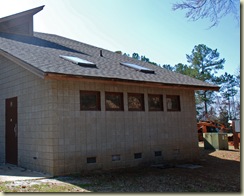 The fish cleaning station turned out to be far from a minor project. You can see some of the equipment involved in preparing the infrastructure in the photo above. Not only is this cleaning station automated. It will have its own septic tank. I’ve yet to see one of these. A good excuse to return to this Park. 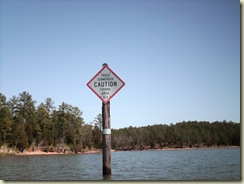 One good rule of thumb when interviewing State Park personnel is Never to ask them how good the fishing is in the nearby lake or river. Fishermen, it seems, and those related to that endeavor, are allowed – if not expected! – to exaggerate. But I had to ask. Nearly every person on or near the Lake was there to fish. And all of them described the fishing as glorious. The photo above is of a cove across from the Park where trees have been submerged to attract fish. That new fish cleaning station should get a good work-out!

So, there you have it. An interview with Mr. David Drake, Manager of Calhoun Falls State Natural Area. I assure you that Mr. Drake’s description of the Park, its facilities, and the surrounding area are in no way exaggerated. It’s really that nice here!

Click here if you’re prefer to listen to the interview from beginning to end.