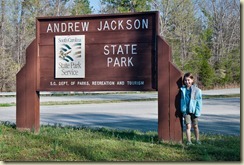 Last week I had the opportunity to camp for five days at Andrew Jackson State Park in Lancaster County, South Carolina. This trip was a special treat since our Granddaughter, Janie, was able to accompany me for the last two days, collecting materials for her own website. 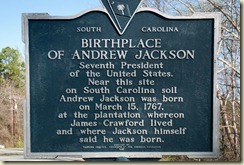 Andrew Jackson State Park is South Carolina’s only State Park dedicated to a U.S. President. My sources here are limited. But I believe work began on this Lancaster County Park in the 1940s, with Daughters of the American Revolution Waxhaws Chapter Regent, Mrs. Ben C. Hough Sr., playing the lead role. This according to the March 3, 2008 on-line edition of the Lancaster News. 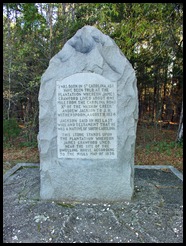 Early Park supporters hoped to create a facility that would honor the only U.S. president born in South Carolina. Well, there was controversy about that birth. With some folks above the border insisting that Jackson actually was born in North Carolina. Not South Carolina. [recall the Kings Mountain Battle controversy …] Mrs. Hough and other South Carolinians disagreed, and created this Park. Including the monument you see above.

It may be difficult to make out the monument text in that photo. Even after clicking on it for a larger image. It reads:

’I was born in Sth Carolina, as I have been told, at the plantation whereon James Crawford lived about one mile from the Carolina Road X of the Waxhaw Creek.’ Andrew Jackson to J. H. Witherspoon, August 11, 1824. Jackson said in his last will and testament that he was a native of South Carolina. This stone stands upon the plantation whereon James Crawford lived. Near the site of the dwelling house, according to the Mills map of 1820. 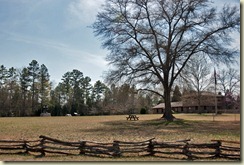 So, whatever the merits of the case visitors to Andrew Jackson State Park today can take advantage of controversy to learn more about our seventh president. That’s the Park Museum and Office in the background, behind that beautiful tree. 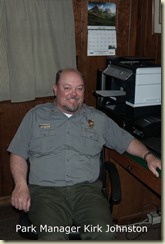 The Park, initially sited on only a few acres of land, was acquired by the State Park System in 1953, and expanded to its current size of 360 acres. Andrew Jackson State Park maintains its close ties with Lancaster County, according to Park Manager Kirk Johnston. 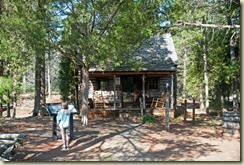 One example of those close ties can be seen here. This late 18th century schoolhouse replica was created and is maintained by an association of retired Lancaster County schoolteachers. 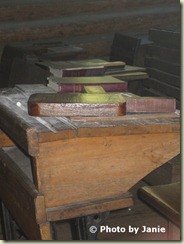 The exhibit was closed when we visited. But it’s open on the Park’s busy days, with an interpreter to explain school life during the era when Andrew Jackson was growing up. Here’s a photo of a few of the artifacts inside that Janie took through the Plexiglas door. I hope to see more of this exhibit during future visits to Andrew Jackson State Park. 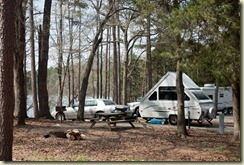 Well, over to the campground to set up on site # 15. As you see here, # 15 is a paved pull-through site. This is a relatively small campground. So during busy times, be sure to reserve early. Some sites are paved; some aren’t. They also vary somewhat in their levelness, if that is a word. But most are fine for a travel trailer like the Aliner. More on the campground and the rest of Andrew Jackson State Park in the next post.