A Backbone for the Advanced Elements Expedition Kayak

Several readers have written to ask for more information about the Advanced Elements AF Expedition kayak featured in a few of these blog entries. I’ll try in this post to give some more information and descriptive photos. Especially about the recently added “backbone” accessory. 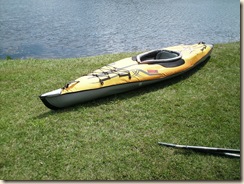 Keep in mind, this information is far from definitive. I have no relationship with the Advanced Elements company, other than as a satisfied customer.

More important, I have no real expertise in the field of kayaks and kayaking. I’m only an enthusiastic novice ElderPaddler, hoping to encourage others to take the plunge. Oops …. Bad choice of words there. ‘Er, to take up the sport. No need to plunge, unless you want to!

Those of you in search of more specific and reliable information should click on over to the Advanced Elements website at:

This is what you’ll find:

Have a look under “products” for the “Advanced Frame” page. A ways down the page you’ll find information about the Expedition that I paddle around and write about on this blog.

Well hidden within the Advanced Elements website, under “support,” is a link to a community forum:

This archived forum contains an enormous cache of information about Advanced Elements’ products, and about inflatable kayaking in general. Forum members and Advanced Elements staff are quick to answer questions about their products. So, sign in and give them a try!

Now, the Expedition is described on the Advanced Elements website as “ … a thirteen foot hybrid of a folding frame kayak and an inflatable kayak.”

That sums it up. In contrast to many, if not most, inflatable kayaks, the Expedition has aluminum structural components that add shape and rigidity to the craft with little additional weight. I haven’t made any sort of rigorous comparison, but suspect this additional rigidity and shaping makes my Expedition all-around easier to paddle.

Here’s an example of the rigidifying components, from photos our son and I took during an inflation session in our driveway: 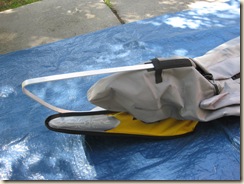 That’s the bow rib in the photo above. It’s made of sturdy aluminum, and fits right into the bow of the canvas cover for the main inflation tubes. The gray canvas cover is on the right.

Prior to inflation, the bow rib is pushed smartly into the very bow of the kayak. The stern has a similar aluminum rib. Once the kayak is inflated, these ribs are held tightly against the outer skin of the kayak, front and rear, by air pressure in the main tubes.

I’ve paddled my Expedition with no difficulty since purchase last year with only those aluminum bow and stern ribs providing additional shape and rigidity. When the two big main tubes are inflated properly, the kayak feels solid as a rock. As this earlier photo demonstrates: 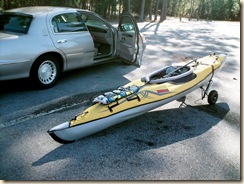 The Expedition is mounted here on the little kayak cart I carry to ease transport from car to water, and back again, once inflated. Note how rigid the kayak is under full air pressure. Hard as a woodpecker’s mouth, as we used to say OverHome.

However, as an option, Advanced Elements offers another aluminum frame component: a “backbone.” Click the link below for a photo and short description of the backbone on the AE website:

The backbone is described here as “… a bow-to-stern frame … which enhances both rigidity and performance.”

After reading myriad posts on the Advanced Elements forum, I decided to buy a backbone a month or so ago. Realizing that nearly all of my voyages in the Expedition extend for several miles. Sometimes for more than ten miles! In the hope the “enhanced rigidity and performance” would make the boat a little easier to manage and paddle.

Cost was just under $100, plus shipping. Here’s what it looks like packed in its mesh bag: 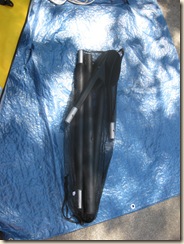 And here are the five components of the backbone laid out beside the kayak, ready to assemble: 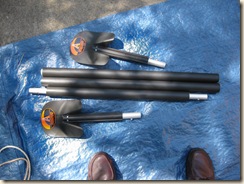 The shoes, hopefully, give some idea of scale. It’s hard to show in photos, but this backbone isn’t at all flimsy. It’s made of good thick and solid aluminum. Five pieces in all. End pieces -- one for bow and one for stern -- each with flat tongue-like shapes that fit between the main canvas-covered inflation tubes and the hull at each end. And three extension-like tubes that give the backbone its proper length.

The extension tubes themselves are covered with a thick layer of rubber-like foam. The sections fit together firmly with the attachment mechanism you see below. 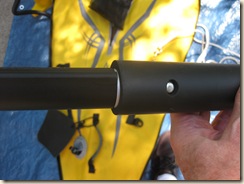 This certainly isn’t a flimsy piece of equipment. Solid as a rock, to coin a phrase. Indeed, so solid I feared that installation would seriously compromise the comfort of the kayak’s seat during long paddles. That’s about as delicately as I can put it. I mean! Think of straddling a solid thing like that for extended periods of time.

Well, I don’t know why. but once everything was assembled, the seat didn’t feel any different than it did without the backbone. Must be the inflatable floor pushing it down into the hull, rather than up toward the paddler.

Here is the backbone nearly assembled and placed lengthwise atop the kayak. Ready to tuck each end in between the main tubes and the hull, and then to connect the two sections. 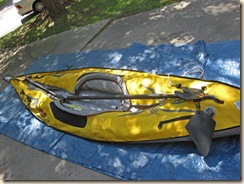 Here, the sections of the backbone are all connected, and the bow and stern sections are tucked under the main tubes. 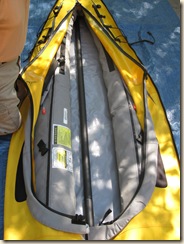 Speaking of the inflatable floor, here’s the floor before inflation, laid out over the kayak in roughly the position it will take once inserted. 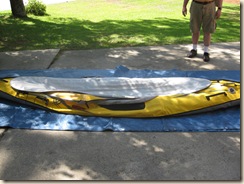 And this is the floor, still deflated, tucked under the main tubes and over the backbone, all but the final section at the bow. 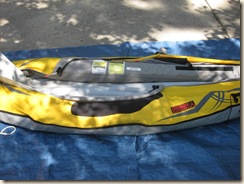 I’ve made only two longer trips with the backbone installed since purchase. So, it’s too early for a definitive assessment. But I can say with confidence that I couldn’t feel the backbone under the seat during either voyage. And, that the boat was easier to paddle with the backbone installed than without. More inclined to glide in a straight line, and somehow "lighter" in the water. "Lighter" here meaning the boat seemed to require less effort to paddle. A nice thing, especially on the way back to the dock!

So there you have it. The hybrid foldable/inflatable Advanced Elements Expedition kayak, with backbone installed. A great solution for those of us who like to have a kayak handy when streams, ponds, lakes, and rivers that need to be paddled pop into view. My Expedition usually rides comfortably in the back seat of my elderly Town Car. On a pad, of course. Together with cart, paddles, electric pump, paddle clothes, and a PFD. A real ElderPaddler enabler.