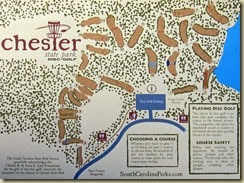 Yes, I know. Yet another article about Chester State Park. Well, it can’t be helped. This remarkable State Park, only an hour’s drive from Columbia, SC, just opened the South Carolina State Park System’s first disc golf course. Click the photo above for a larger view of the picture of the course taken from the new brochure.

Click here if your browser doesn’t play nicely with the video embedded above.

Last year Park Manager John Wells told me he planned to build this course. I was polite, but skeptical. The area he’d selected for the course was beautiful. Right next to the lake. But it was dense forest. Difficult to hike through, let alone play disc golf. Further, golf courses, disc or otherwise, require a lot of funding and person-hours to build. Both funds and personnel are quite limited at Chester State Park. They’ve got enough to do already, and little enough to do it with. 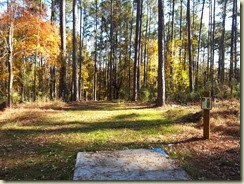 Well, it’s happened. Trees, brush, brambles, and vines have been cleared. Fairways have been smoothed; concrete pads installed at each tee. And most important, disc golf targets erected. True to the design of Innova’s champion course designer, Russell Schwarz.

Have a look at the video above if you’re new to disc golf. Park Manager Wells introduces the game.

Chester State Park  now actually has two courses. One a professional-level eighteen-hole course; the other a nine-hole beginner’s course. So aspiring players of any skill level or age can play comfortably.

In this final video Park Manager Wells describes the new course and its relationship to Chester State Park in more detail. This is some accomplishment. Congratulations John and Brandon.

You’ll find more information about disc golf at the website of the Professional Disc Golf Association here. And at the Innova Disc Golf corporate website here. 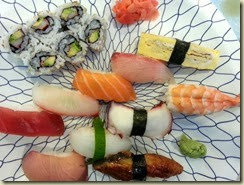 Our family found a few such restaurants when we lived in Washington, D.C. But the good ones were enormously expensive, and usually packed to the eaves with the expense account crowd. So, most of our sushi eating was done during frequent trips to Japan.

When we moved to Columbia in 1986 we didn’t even think about finding a sushi restaurant. Who could imagine going to Columbia, South Carolina for real sushi? I mean! Well, we were wrong. Not long after our arrival, a USC colleague invited me to a newly opened Japanese restaurant he said was the real thing. He was right. Sakura served sushi every bit as good as that served by the best restaurants in Washington, D.C., or in Tokyo, for that matter. And at a fraction of the price. What a deal! Tokyo sushi at Columbia, South Carolina prices. Now, you can’t beat that with a stick.

Sakura is centrally located, right across from the Forest Acres shopping center, with its Starbucks, Fresh Market, Chipotle, and so on. But not so easy to find since it’s back behind the First Citizens Bank and Coplon’s. Here’s a short video that may help.

And here’s a link to the YouTube iteration if the embedded video above doesn’t display properly in your browser. Click here.

Once inside, you’ll find a relatively small and inviting restaurant. In fact, here’s a “maneki neko,” or beckoning cat, welcoming you from the counter. 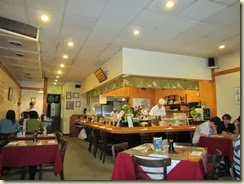 Seating is either at the counter or at one of the dozen or so tables.

The quality of sushi at any Japanese restaurant depends on the skill and dedication of the master chef. Genuine sushi chefs, traditionally trained, are increasingly scarce even in Japan, let alone in the United States. So we’re fortunate here in Columbia to have Mr. Norio Saito. Here’s a short video that introduces him.

As he explains in the video, Mr. Saito has unusual training. He began making sushi at a “kaiten zushi” restaurant in the early 1980s. “Kaiten” here means literally “conveyor belt.” And that’s how sushi is served in such restaurants. Servings are prepared quickly, put on individual plates, and sent to customers along a constantly moving conveyor belt. Customers select what they want and pay according to the number of plates stacked beside them at the end of their meal. You can imagine the pressure to produce acceptable servings quickly. 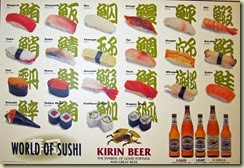 After several years’ training at “kaiten zushi,” Mr. Saito moved to New York to study under a traditional master sushi chef for two years. There he learned to make what he calls “more serious” sushi before coming to Columbia in 1986.

The benefit of this intensive training and more than thirty years’ experience is what we get when we order sushi today at Sakura. It’s incredible!

During the interview I asked Mr. Saito how many kinds of fish he offers as sushi. He thought a moment, said it all depends on the season and freshness, and then replied that there are so many he couldn’t tell. Keep in mind, each kind of fish has its own selection criteria and preparation method. No wonder it takes so long to become a real sushi chef!

So there you have it. The Sakura Restaurant in Columbia, South Carolina. Open every day of the week but Sunday for lunch and dinner. You can’t do better than this without traveling to Japan! 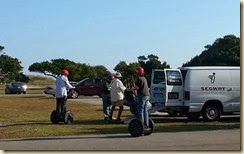 Last week at Huntington Beach State Park I saw a gaggle of senior citizens following a tour guide through our campground, about to go out onto the boardwalk leading to the beach.

Nothing surprising about that except they all were riding Segways. I mean! Most of the group appeared to be older than me. Some a good bit older. And all having fun.

I was in the Aliner writing and didn’t get any video. But the following day I saw the tour guide and Segway instructor waiting for a subsequent tour group to return. He was from Seattle, Washington, where Segways aren’t all that uncommon. A retired federal officer who knew how to teach, and how to make folks feel comfortable on those interesting machines. Here’s a short video.

If the embedded video doesn’t behave properly in your browser, click this link to view it directly on YouTube.

I’ve got to give a Segway a try at least once before it’s too late. Combining a tour of Huntington Beach State Park seems the ideal opportunity.