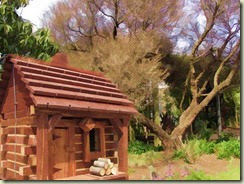 Where does “craft” leave off and “art” begin?
Last Friday we drove from Columbia to Camden, South Carolina, for another lunch at the Palmetto Coffee Shoppe. Outstanding sandwiches, coffee, and dessert. With the added attraction of Mr. Jeff Clark performing right in the dining room. What a treat! 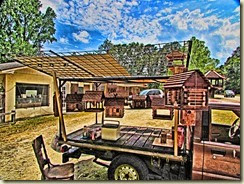 On the way to and from Camden we passed an early model pickup parked beside Route One. Both times we passed by the truck had attracted quite a crowd, covered as it was with unusually shaped bird houses. We weren’t in the market for another bird house. But after sitting at home for less than five minutes I couldn’t resist a return visit.
So, back down Route One to have a closer look. Well, I got to see the bird houses and also got to meet Mr. Brian Baldwin, their creator. Here’s a short interview with him and a few more photos.

(Should your browser fail to display the video above, click here to go directly to YouTube.)
As he explains in the video, Mr. Baldwin maintains neither an e-mail address nor a web site.
His snail-mail address is:
“64 Settlers Drive, Ridgeway, South Carolina 29130”
But it’s probably easier to reach him by calling:
Home: 803-272-5962
Cell: 803-337-6070
Keep on the lookout for Mr. Baldwin and his remarkable creations as you drive South Carolina’s highways. Be sure to stop.
Posted by Robert Angel at 9:14 PM 0 comments