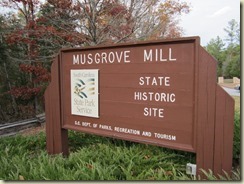 Musgrove Mill State Historic Site near Clinton, South Carolina, commemorates one of the most important battles of the Revolutionary War. It was here that American Patriot forces proved they could defeat their better equipped and disciplined foe. And just how it might be done.
Here’s a link to a series of articles I did on the site and battle around four years ago. Click here. Plenty of photos and text. 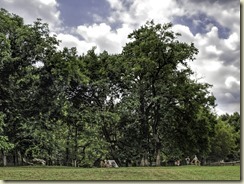 Last Saturday, July 25th, Musgrove Mill was a more peaceful place. Hosting a colonial market and craft fair. Now, late July in South Carolina can be uncomfortably hot. The 25th was no exception. You can see fair exhibitors clustered in the shade of the site’s huge old trees, doing their best to avoid the sun. At least it didn’t rain, which would have been worse. 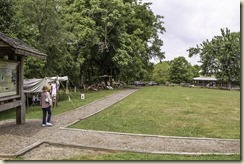 We arrived in the early afternoon, hoping to see an interpretation of life in South Carolina during the latter half of the eighteenth century and weren’t disappointed. All sorts of exhibits by some of the Carolina’s better known reenactors and artists specializing in the era. 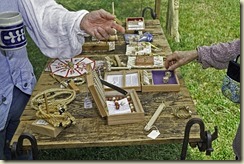 Here Dennis Voelker of Dragonfly Traders demonstrates “Shut the Box,” a game popular during the Revolutionary War period. Click that photo for a closer view. The Voelkers handmade that and the other games here displayed. Remarkable work. Listening to Mr. Voelker’s explanation I accused him of being an academic. He denied the charge …. I still wonder ….. 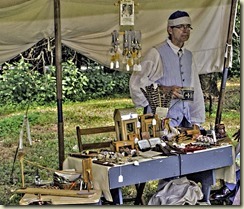 Ignoring the heat we moved along to the Early Family’s exhibit, where I failed to get a good photo, to the real reason we decided to attend the fair. 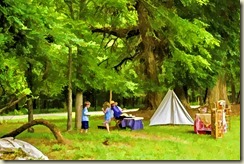 She runs KMJ Crafts and Pottery. What an artist. Be sure to click the photo above to get a better look at the work she displayed at the fair. 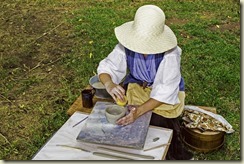 Ms. James works without a wheel. Much of her pottery is of the “pinch and coil” variety. The same technique used by early American Indian potters. Potters around the world, for that matter.
We were able to watch a few minutes of her “pinching and coiling” as you see in the photo above. Give the photo a click so you get a more detailed view. That pen-looking tube beside her board is a coil of clay she’d prepared.
In a weak moment Ms. James agreed to sit down for a CarolinaConsidered interview later in the year. She’s busy until then. Well … she’ll be busy then too, but I’ll try to pin her down. Should be a great one. Drop a note if you have suggestions for questions to ask her. 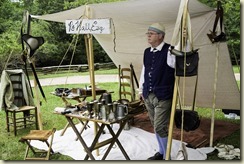 Mr. Robert Hall, the celebrated colonial reenactor, was set up down near the Historic Site office and museum building. Click on the link above to access his Facebook page. It’s well worth a visit. He described himself when I asked as just a “retired public defender,” or something like that. Well! Have a look at his background. He sure knows a lot about this period of American and South Carolina history. Must have been that good University of South Carolina undergraduate and law school education …. 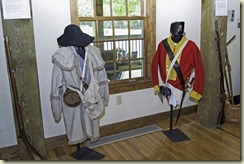 By the time we finished at Mr. Hall’s exhibit we were ready for a good dose of air conditioning. So in the museum we went. Be sure to save time for a good long visit to this museum when you’re next at Musgrove Mill. They’ve done a lot in such a small space. Interpreter, Mr. Bobby James, will answer your questions and provide even more information about the battle and era if you ask. 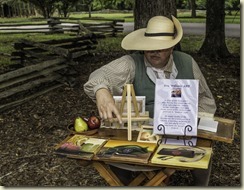 Back outside we took another turn around the field and got to see some of the work of Greenwood, South Carolina artist, Mr. Eric Williams. Click on that photo for a better look at his display. Didn’t get a chance to chat. He was busy answering questions. I think, but am not sure, that Mr. Williams was the longtime head of the Ninety-Six Historic Site maintained by the National Park Service. If so, quite a background! His art reflects that sort of experience, anyway.
By this time we both were all sunned out, so to speak. Had to have big drinks of water and get back to the truck. 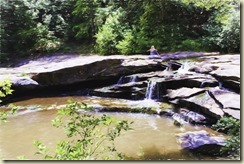 There’s even more to see on the other side of the river if you still have time. Better yet, come back for a second full day to walk the trails, see the battlefield proper, and enjoy the horseshoe falls you see above. Give that photo a click and cool off!
So there you have it. Musgrove Mill State Historic Site’s Colonial Craft Fair. I hope they make this an annual event. Maybe next year in the spring or fall when the weather will be a little more comfortable. But we’ll attend any time of year. Well worth the drive.
Posted by Robert Angel at 11:38 AM 1 comments