Back again for a second day of enjoying this remarkable Museum and its effort to preserve and explain the culture of Southern Appalachia. 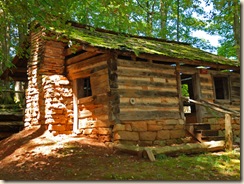 So many things – so many different things – are assembled and displayed here that it’s near impossible to divide the Museum’s collection into two or three discreet categories. 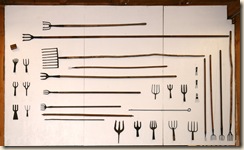 But for the sake of convenience, I’ll give it a try in this post and one or two more. This one devoted to the Museum’s countless collections of artifacts, for want of a better word. And the second devoted to the 28 or 30 buildings on the grounds displayed to represent early Southern Appalachian life. Each of those buildings, of course, is an “artifact.” And each of those buildings houses its own collection of “artifacts,” meticulously selected and placed to help the attentive visitor better understand what life there was like. 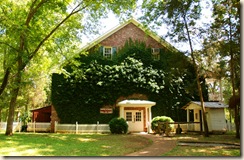 Two large utilitarian structures house the majority of the artifact collections, as I’ve used the term here: the “Appalachian Hall of Fame,” and the “Display Barn.” That’s the Hall of Fame you see in the photo above.

I spent hours walking through two of the Hall of Fame’s three floors. Its 15,000 square feet “ … house personal and interesting relics which belonged to unusual, outstanding, interesting, and/or colorful persons closely connected, one way or another, with the Southern Appalachian Mountains,” to borrow John Rice Irwin’s words from The Museum of Appalachia Story (p. 27).

That’s the guiding principle, anyway. Memorabilia from individuals as diverse as Cordell Hull, U.S. statesman, Sgt. Alvin York, World War One hero, and Enoch Houston Williams, an illiterate mountain tinkerer who built a highly functional telescope from scrap metal and glass that he ground into lenses, are included here. Yes, as is Enoch’s telescope! Each display is chuck full of personal items. Most, meticulously annotated with details that provide the “context” mentioned in the last post.

Musicians, as one might guess, are prominent here. As is the role of music in Appalachian culture throughout the Museum. Roy Acuff, Bill Monroe, and the Carter Family have their own corners. 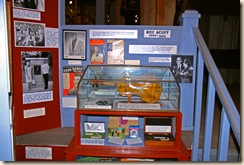 All names familiar to anyone with a proper musical education. And some whose names might not be quite as familiar. Like Carlock Stooksbury and his mouth bows. 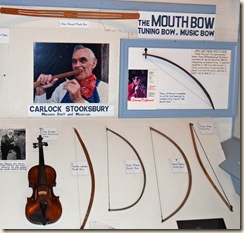 In addition, the collection includes unusual or humorous instruments, such as this rare “Ukuweewee,” or bedpan banjo. Perhaps one-of-a-kind. One can only hope …. 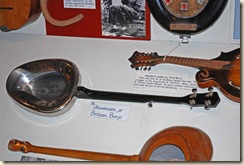 Basket making too receives special attention at the Museum of Appalachia. Anyone interested in this exacting craft, and in the importance of baskets in Appalachian life, could spend hours here learning more about technique and style. Below is just one display of various types of baskets made and used in Southern Appalachia. 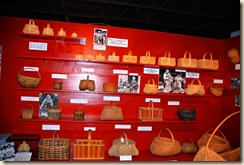 And here is an example of the detailed annotation provided. One of the few I saw not written by John Rice Irwin himself. 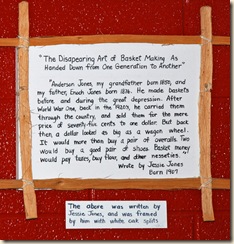 Not far from the basket display is preserved the “medicine house” of Dr. Andrew Jackson Osborne, who treated the ills of people in Blackwater, Virginia, until his death in 1937. 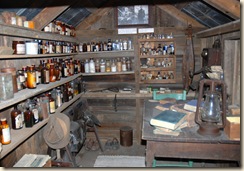 The modesty of this facility testifies to Dr. Osborne’s lack of interest in accumulating wealth. The annotation, in part, reads, “He ministered to the sick and dying, all his life, night and day, and when he died the preacher who conducted the funeral had to furnish him a suit for his burial.” It’s hard to imagine a teaching device that would more effectively explain medical care in much of early Southern Appalachia.

For me, one of the most interesting exhibits in the whole Museum, and the one that required the most time to visit, is devoted to the American Indians who occupied the Southern Appalachian region well before the arrival of European and African immigrants. 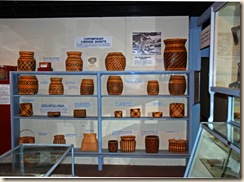 Now, I’m only an avid consumer when it comes to archeological scholarship. And therefore don’t presume to write as an expert. But this collection includes some of the most remarkable pieces I’ve seen. Well beyond the usual rows arrowheads, spear points, and broken pottery. 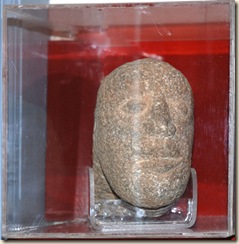 Apologies for the photo. Click on it to see a little more detail. It’s a very rare item, dating from the 15th century, found near a large burial mound in nearby Sevier County. The back portion (that I forgot to photograph!) is shaped like a wedge. Leading some authorities to speculate that it may have been stuck in the ground with the face pointed upward as part of preparations for burial. 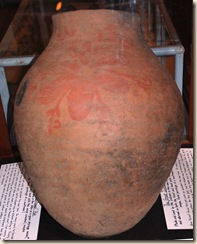 Here’s another extremely rare item in the Museum of Appalachia collection of American Indian artifacts. It’s labeled “The Great Indian ‘Sunflower’ Pot.” The pot was made and used some time during the 16th century, and found intact under an uprooted tree near the Museum.

This vessel is especially unusual in that the markings you see on the front depict a flower, a sun flower, rather than an abstract design. And, according to the annotation on the side, sunflower seeds were found in the bottom of the pot when it was unearthed.

I could go on and on here. Just in the American Indian exhibit alone. But we’re well past our time. More on the collections in the “Display Barn” in the next post. So stay tuned!